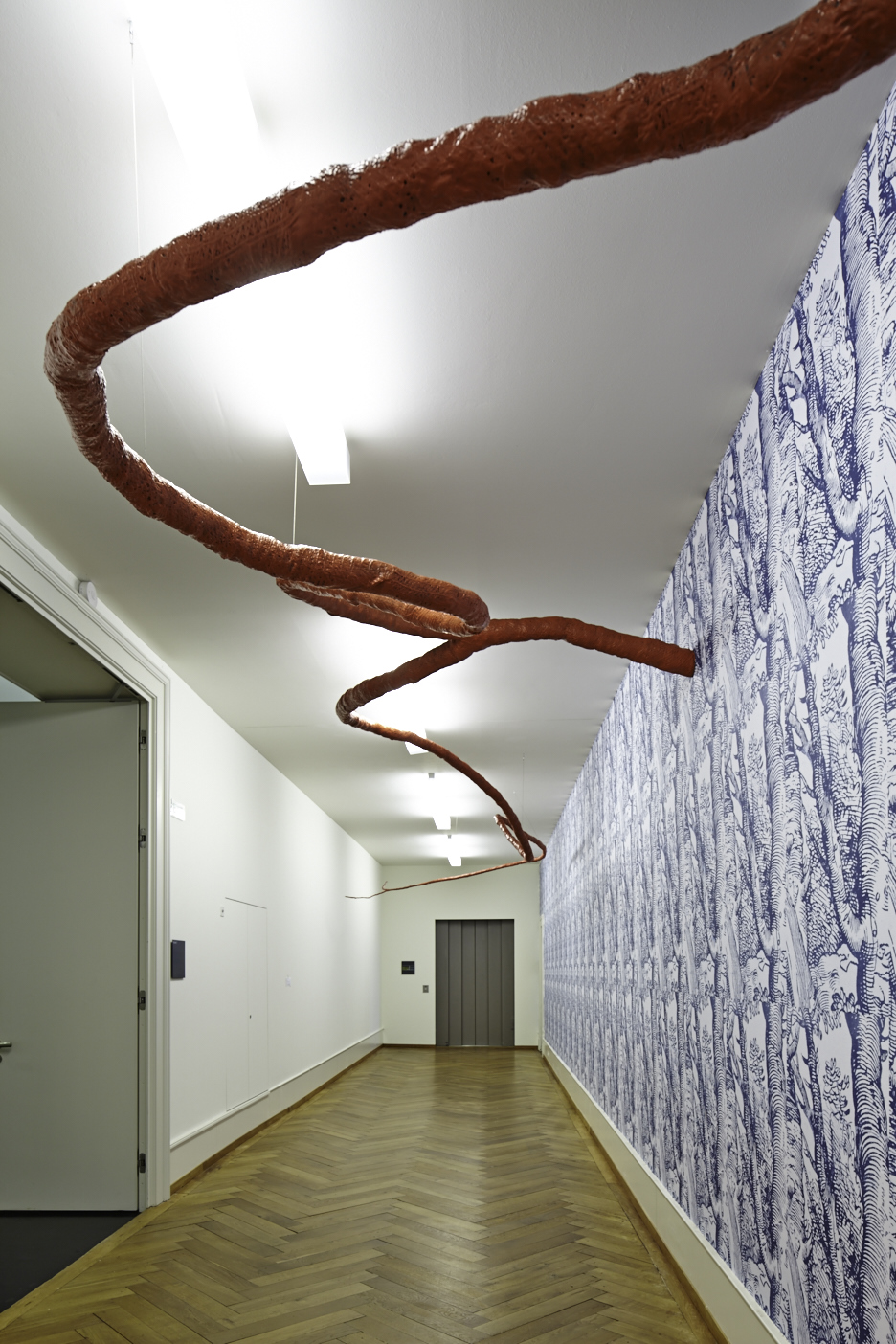 Pascal Häusermann (*1973, Chur) takes up and reinterprets traditional patterns, forms or representations. Surprising combinations with intelligent references to social, economic or cultural phenomena are created as a result. The artisanal  – demonstrated, for example, in the connections with stone masonry, engraving and typography techniques and, as a recent addition, the patterns of mosaic tiles – plays an important role in the artist’s work.

In his first institutional solo exhibition Pascal Häusermann focuses on the principle of layering which is groundbreaking for his practice. This form of superimposition plays with the ambiguity between duality and unity. What first appears as a unit reveals itself to be pieced together but can then be synthesised again. The artist is interested not only in the layers of various media, such as photography and woodcut, but also in the superimposition of or connection between historical and current sources of imagery, or of different thematic links.

In the first part of the exhibition Häusermann is showing a series of monotypes („Salvation“) which he has been adding to continuously since 2010. For each one a motif taken from nature from a 15th century woodcut is laid over a contemporary „high-end“ interior. Not only are two quite different media – woodcut and photography – combined, but also two worlds. Even if the layered images appear very different at first sight, they have one thing in common: they emphasise the grandeur of that which is represented. This can be the dramatic staging of nature just as well as the elegant new building dominated by steel and glass. What occurs in „Salvation“ on a two-dimensional plane is transferred into the three-dimensional with the installation made specially for the spaces of the CentrePasquArt. A gigantic bough with intertwining branches grows from out of the wall, takes over the corridor of the museum and ends finally in one of the exhibition rooms. The sculpture is complemented by a wall painting recalling plant forms.

The second part of the exhibition includes works that were produced in the context of a residency in Paris. In connection with the intense intercultural exchange between France and Islamic countries, Häusermann concentrated on the tradition of Moroccan and Moorish influences on art.  Taking mosaics, the patterns of wall paintings and ornamental reliefs on facades as a starting point, he attempted, for example, to form the flat motifs into three-dimensional structures. In other works the tracery of the mosaic acts as a symbol for the (urban) labyrinth which Walter Benjamin discusses: „The city is the realisation of the old dream that humans have of the labyrinth. Without knowing it, the flaneur pursues this reality. » Inspired by Benjamin’s thought, Häusermann creates links between the mosaics and city plans or the  Paris metro system and thus connects the geometric patterns with an orientation system. On the other hand the combination of religious and urban ornamental forms evokes numerous associations with the social and cultural life of Paris. The exhibition is completed by a work that, as a development of the combination of Moorish mosaics and the public transport network, makes a connection with Biel and in doing so points out the similarities between the two cities.

Curator of the exhibition: Irène Zdoroveac