Zara Idelson’s (b. 1987, CH) approach to painting is based on intuition and direct observation as well as a clear set of parameters consisting of small-scale works and a limited palette. Texture is created through thin layers of paint, vital with brushwork over bare priming, where colour is used less to depict than to create a sense of movement. The exhibition focuses on the series of figurative paintings begun in 2017, when the artist moved to London, and reflect her curiosity for her new surroundings. Employing line drawing and intimations of detail, Idelson depicts the places and incidents she comes across in her everyday life, such as the back of a public building seen from a cycle path, underground station entrances and children’s chalk drawings on pavements. Dusky scenes of the city at night are quietly atmospheric, while a preoccupation with framing devices is evident in the frequent depiction of views from windows. Ultimately, however, these images are an exploration of the medium of painting itself.

Following a period of making semi-abstract paintings, Idelson’s new surroundings in London prompted her to produce figurative images. Simultaneously, she has more clearly defined her approach to making paintings. When travelling through the city, whether by foot or by public transport, she spends time observing how it functions, taking photographs on her mobile phone. She then translates these as literally as possible in oil or acrylic paint on canvas, depicting only what is necessary for the image to be read. This process sets limits on the possibilities that Idelson allows herself, eliminating both reflection on what she is painting, as well as any compositional adjustments. Whereas in earlier work she occasionally added structures to improve the composition, she now includes elements recorded by the camera, such as the diagonal line of shadow across a painting, that can make the image more ambiguous or difficult to read. The significant decision lies in the choice of the moment in which to take a photograph. Ironically, this clear definition of a strategy allows the artist greater freedom in the way she paints, the spontaneity and intuitive approach to brushwork corresponding with the matter-of-factness of the subject matter.

In the paintings from 2017 Idelson translated the scene in a photograph into a black drawing on the canvas. Some works remained as a line drawing; in others she filled in the image with colour, the oil paint allowing transparent layers through which the black remains visible. Although the application of paint on canvas occurs swiftly, the process of reflection is much longer and many works are discarded. Since working in 2018 with acrylic or water soluble oil paint, which prompted the work to be built up as a single structure, the element of drawing has been subsumed by blurred areas of colour. The newer paintings are darker and more brooding, not in connection with the subject matter specifically but rather as a means to portray the atmosphere of the city more generally. The unusual angles, for example the image of a hand on the steering wheel of a car, are dictated by Idelson’s movements on foot. In contrast to the scenes of cityscapes or views through a window, the more recent works zoom in on details of road markings that Idelson observes as she walks in London. She considers the differently coloured signs, applied to black or grey asphalt as a visual language similar to her own application of paint on a two dimensional surface.

The most striking characteristic of Idelson’s painting is her reductive style. Interested in how little is necessary for a painting to exist as such, her aim is to depict the « groundmarks » of the photographs with as light a touch as possible. Indications of things often recall the sketchy aesthetic of cartoons, for example in her reductive depiction of cars or trees. In addition, she frequently highlights selected elements of a painting in variations of a single colour.

Idelson’s commitment to painting is based on the evocative nature of the medium and the way it can hold within its materiality both a wider sense of place and a powerful impression of atmosphere. Her work is inspired by how the richness of images can be achieved through simple strategies of making. Related to this is the small scale of her work, which invites a particular response from the viewer, drawing their attention to the edges and the physical depth of the painting. As significant as Idelson’s exploration of her reactions to her new environment is the process of making that she has defined: the limitations she applies to the ways in which the image is depicted allow her a more intense engagement with the act of painting itself.

After spending her childhood and youth in Geneva, Zara Idelson studied at the Glasgow School of Art. She has been living and working in London since 2017 and will complete her Master at the Slade School of Fine Art, London in summer 2019. The presentation at Kunsthaus Pasquart is her first institutional solo exhibition.

With the generous support of the legacy of Mme M. Mottier-Lovis 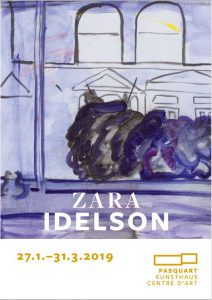