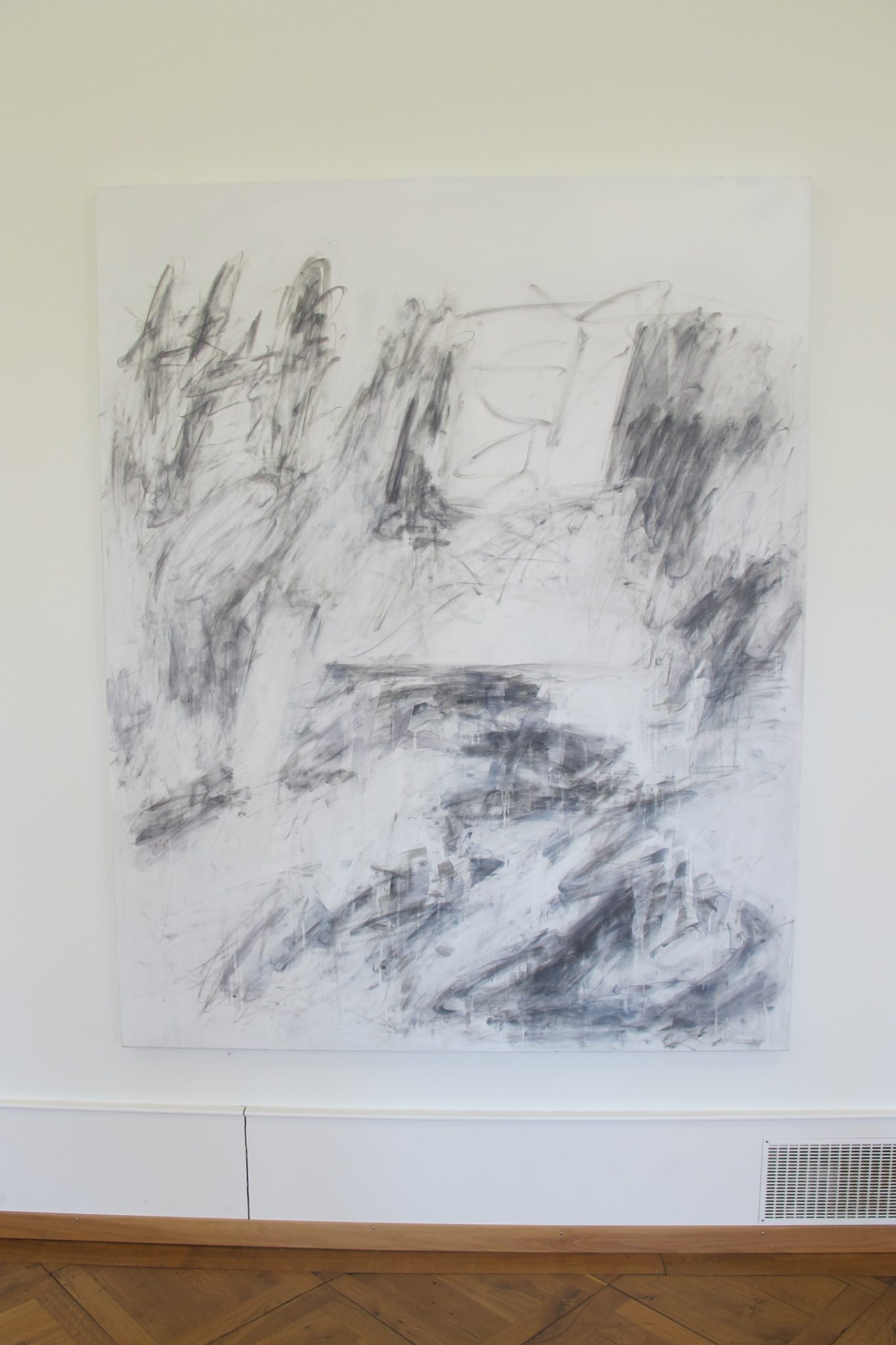 The paintings of Rannva Kunoy (b. 1975, Faroe Islands) appear on first sight to consist of a simple, monochromatic surface disrupted by scratch marks that engage with the ghost traces of the frame. Yet on closer inspection the works have a three-dimensional, almost holographic quality. The shimmering colours and shifting forms reinforce the impression that in Kunoy’s paintings something is always just coming into being. This series will be shown alongside another group of paintings with comical overtones. In these, the absurd gives way to lines which almost form a narrative but are never quite clear enough to suggest a definitive subject. A significant feature of Kunoy’s work is the performative aspect. The artist’s movements are clearly recorded in the dynamic line drawings that recall the fleeting pictures traced on frosty windows or with a flashlight in the dark. The paintings also appear to trick the viewer, the space changing and the marks becoming more ambiguous as one moves around the work.

Rannva Kunoy is intensely aware of the context of her work in the history of painting, in terms of both the influence of developments such as Minimalism, as well as the challenges for the medium today. She approaches the practice of painting as a language consisting of tools that root her work in this history and at the same time allow her to explore ways of taking it in new directions. Although her work always appears to be coming into being, the opposite is also true: the paintings have a powerful immaterial quality that seems to make their surface independent of paint and canvas.

Kunoy achieves this sense of an illusory space by leaving stretchers visible or by applying layers of crystal paint to dark monochrome backgrounds. The ethereal nature of the surface belies the long physical process of working the canvas, during which the removal of dry paint with a brush or sponge is alternated with the addition of layers of acrylic or crystal paint. The latter is crucial for Kunoy’s technique for its chemical process allows the artist to create the impression of light shining both out of and into the canvas. This effect recalls legends of mirrors that allow a passage to the other side, and is heightened by the ghostly drawing of a frame on the border of the canvas. This not only operates as a threshold between exterior and interior but also reminds us that, in spite of its ability to create the illusion of spatiality and depth, painting is ultimately a construct.

The simplicity of the mark making in these paintings is balanced by a second series of work in the exhibition that is edgy and awkward rather than seductive. The thick lines in either black and white or pastel blue and pink on a white background represent the negative marks built up through a lengthy process of masking out areas with latex. More graphic in feel than the first series, they recall drips in reverse, blown up details from larger paintings or the gestures familiar to us from cartoons.

These works were developed from an earlier body of paintings that imitated automatic writing. The formal and symbolic elements of text remain important in Kunoy’s work and are the basis for a further group of works in the exhibition based on fantastical statements or names. The artist’s method with these is as ambiguous as for her other two series: though hand drawn in a negative process of masking out, these paintings also appear photographic. In a similar sleight of hand, her new series of stripe paintings inevitably recalls Dan Flavin’s work but replaces the literalness of his iconic neon lights with the impression of light in paint. Whether created by the structure of the stripes, the outline of the frame or the fleeting traces of drawing, it is ultimately light that lies at the heart of Kunoy’s highly individual contribution to the medium of painting

Publication: A publication will be released during the course of the exhibition.