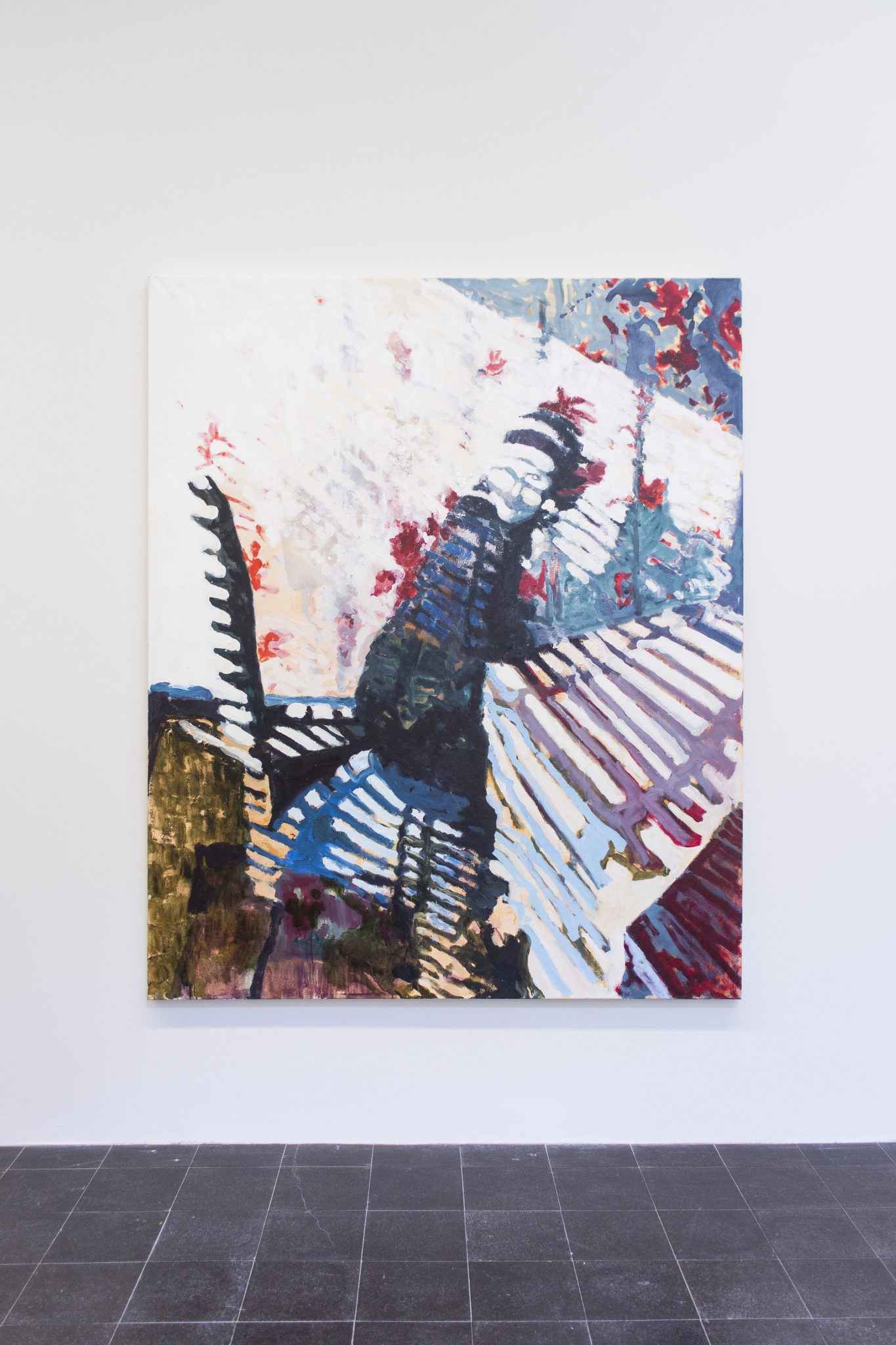 Rachel Lumsden (b.1968, GB; lives and works in St. Gallen) makes paintings that are at least as big as the artist herself, ensuring both her own physical relationship with the work and a direct engagement of the viewer. They communicate a strong sense of how they were created, of an artist sensitive to the character of her material and how it operates. Lumsden’s paintings are too open-ended and ambiguous to be clearly read as narratives; instead they depict charged atmospheric environments, bristling with energy. Her compositions are inspired by a variety of visual sources, from newspaper photos, art historical images and dream pictures to circuit diagrams and advertising material. Combining the overlooked paraphernalia of the everyday with the fantastical and autobiographical fragments with those from the collective unconscious, Lumsden’s themes often coincide with the Zeitgeist in painting as well as with current social and political issues. The exhibition includes work from the last ten years and is the most comprehensive presentation of the artist’s work to date. It is a collaboration with the Fondation Fernet-Branca in St. Louis, France and the Kunst(Zeug)Haus in Rapperswil-Jona, Switzerland.

Lumsden’s paintings have undergone many changes in the last decade, both in terms of subject matter and the handling of paint. Until 2010 the artist chose to work in series, a process that allowed the gradual unfolding of different aspects of a subject. The series Bird Wars (2008 – 09), the earliest works in the exhibition, also demonstrated her ability to create atmosphere without resorting to narrative. Employing birds and animals as a stand in for the human figure and their emotions, these works convey a sense of unease but evade a straight reading. They rely rather on disparate recollections, from the disturbing characters of children’s storybooks and 17th century book illustrations and prints to the sociocritical satires and caricatures of Hogarth and Goya, as well as computer games.

Although Lumsden’s work is clearly representational, the role of the human figure is ambiguous, not least because the artist rarely depicts facial features, thereby avoiding references to narrative or character. Figures are part of the recurring wry humour that is a crucial characteristic of her work, lightening the sometimes oppressive subject matter and at other times emphasising irony, from the hybrid creatures in Bird Wars to the group of figures in Crow Tribe (2016).

There has always been an art historical context for Lumsden’s work and she has no reservations about appropriating subject matter or ways of handling paint. Her references to historical imagery, such as baroque costumes in Bird Wars, as well as references to current affairs, for example Convergence of the Twain (2012) or Alternative Fact (2017), have the effect of condensing past and present, whilst synthesising the historical, political and social.

The encroachment of the past on the present is expressed primarily, however, in the atmosphere of Lumsden’s interiors. The old-fashioned furnishings that appear in many of these – notably an occasional table, lamp and ornaments – root the paintings in the mustiness of old-fashioned sitting rooms that remain part of a particular strata in contemporary British society and have a strong tradition in British painting. In Lumsden’s depictions of rooms objects, particularly lamps and furniture, stand in for the figure, while the ambiguity of space is used to heighten the atmosphere. In Here we go Again (2014), for example, it’s not immediately obvious that one’s looking at a mantelpiece reflected in a mirror. The interiors are usually cropped close, presenting a fractured view and simultaneously enclosing the observer in their introspection. The uncomfortable sense that there is always more to things than meets the eye is reflected throughout Lumsden’s work by the presence of doors – intimating that other worlds might lie behind them – and windows, providing a theatrical framing device to form pictures within pictures.

This ambiguity of reading extends to the way the paintings are made. Lumsden’s handling of paint – both as colour and as physical material – is radical. Colour is simultaneously lurid and grimy, rich and off-key. Until works such as End of a Short Day (2015), with its fields of luminous orange, it has been rare that any one colour has fully come into its own. Black plays an important role, shimmering through or soiling other colours, but acting also as the contrast to the light, which in Lumsden’s work seems to radiate from within. In the last few years Lumsden has become more daring, dragging and pouring the paint in a way that can be partially but not completely controlled by the artist. For this reason, in paintings such as Return of the Huntress (2016) or Titanium (2017) the content of the work is encapsulated in the relationship between colour and the materiality of paint-substance, with the latter often co-existing as a form of autonomous abstraction.