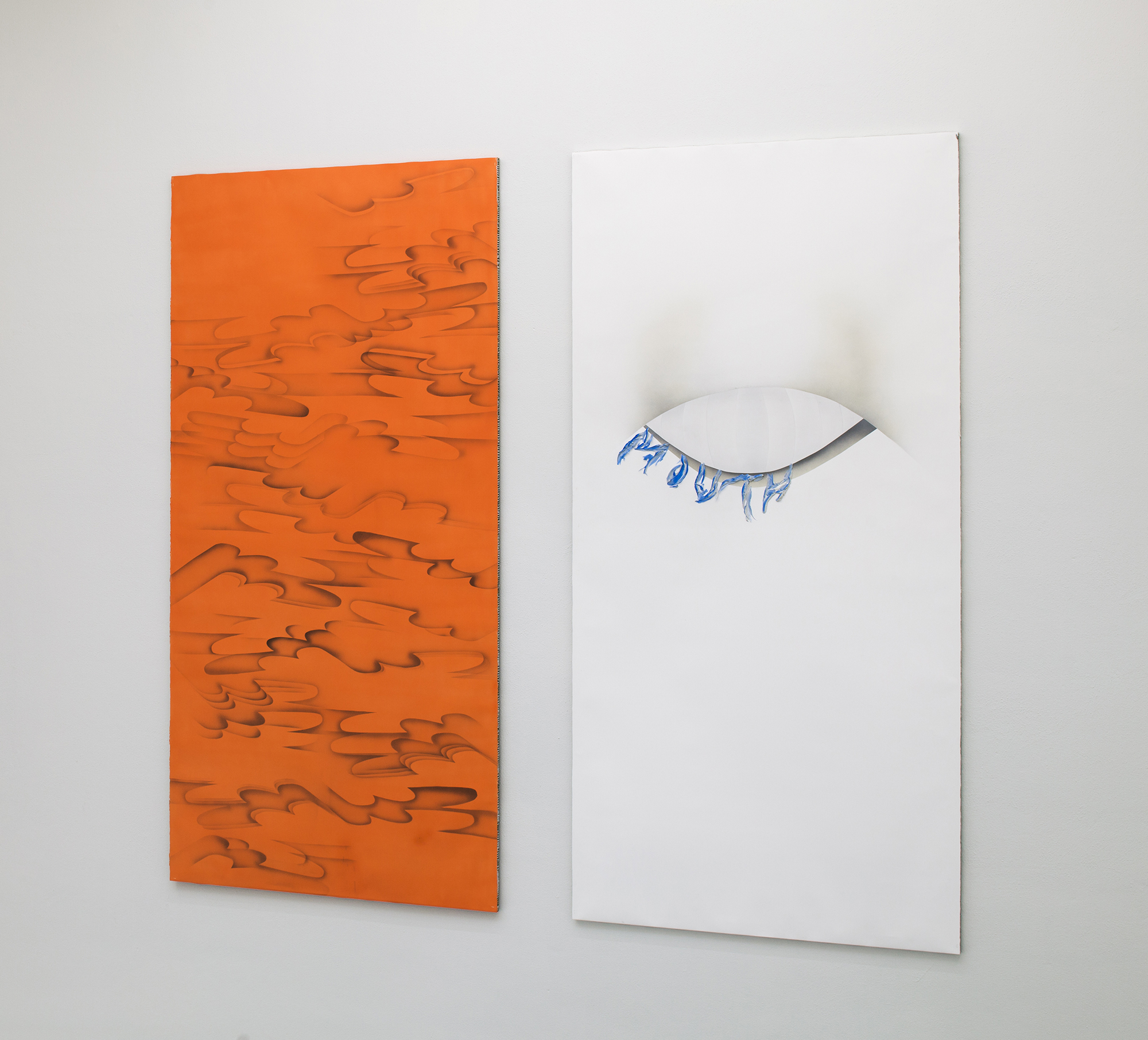 Maija Luutonen’s (b. 1978, FI) large-scale, vividly coloured paintings are made primarily on paper, chosen for its suitability for direct experimentation as well as for the immaterial nature of the white ‘negative’ spaces created on its surface. Considering the material to have a transient quality, she addresses the relation between time and movement, treating the works as an ensemble of slowly moving images rather than complete or final objects. This open-endedness is underlined by the presentation of the work leant against the wall, piled up, folded or placed in front of a door or window. Bringing together colour and light with references to the built environment and nature, Luutonen explores the possibilities for creating the illusion of spatial immersion on a flat surface. She retains in the paintings elements that are awkward or unresolved but nonetheless interesting and dynamic.

The exhibition consists of three bodies of work:  a group of paintings made in 2016; the series entitled Patch shown at the Museum of Contemporary Art Kiasma / The Finnish National Gallery in Helsinki in 2018; and a number of new works that the artist has produced especially for the exhibition in Kunsthaus Pasquart. The paintings produced in 2016 demonstrate Luutonen’s simultaneous treatment of two-dimensionality and spatiality, as well as her consideration of the notion of representation. This exploration extended already at this time to the surface of the paper, which the artist sometimes handled as a relief in which her markings brought forth shapes from the reverse side. In this body of work, she focused on the oscillation between anxiety and ecstasy in times of constant input, on encrypted subjects, strange weather and a potential apocalypse. The paper itself also became an increasingly significant subject of her work, entering the space as a background or curling up at the base, like a secret scroll. Reflecting on spatiality through an otherwise flat surface, in the paintings of 2016 the artist dealt with notions of seemingly enclosed spaces, or rooms; where we live, where we look out from, where the material and digital seem to increasingly merge, or where art is presented. In these works, the surface became a container of narratives and thoughts, the room a stage for both withdrawal and emergence.

In the Patch series Luutonen pushed further the boundaries of traditional painting to create spatiality through colour, light and experimentation with media. She combined here painting techniques with printing, digital processing and borrowed images, enabling her to follow a different process of shortcuts, mistakes and experiments, before arriving at a more concise and clear form of the original idea. The dazzling visuality and highly sensory utilisation of materials and surfaces in her oeuvre became more apparent in the Patch series; at the same time, the artist began to test different and unconventional ways of presenting the works in the gallery space.

The new paintings, made in the second half of 2018, are all connected to the field of vision and to what happens at the fringes of that area. This encompasses the subjects of bodily perception as well as sight and the eyes in general. Similar to the «floaters» that can occur on retinas, giving the impression that one sees floating lines, blurred dark areas and insect-like forms, Luutonen is making works that «see double», have particles floating on them or are somehow not in focus. Whilst this is the psychological and aesthetic field in which the artist is currently working, in terms of the images or subjects that emerge in her paintings, she is dealing with themes such as repetition, words, boredom, tiredness, leisure and meditation. The larger paintings feature spaces that might be described as interior, exterior, constructed by humans or in-between spaces. The smaller works are more like very personal notebook notations and recall close-ups and fleeting moments.

The presentation of Patch at Kunsthaus Pasquart is the first exhibition of Maija Luutonen’s work in Switzerland. It is produced in collaboration with Museum of Contemporary Art Kiasma / The Finnish National Gallery in Helsinki. Luutonen’s Patch (2018) is the first in a series of commissions by emerging artists living and working in Finland. Kiasma Commission by Kordelin is initiated by Museum of Contemporary Art Kiasma in Helsinki with the generous support of Alfred Kordeli Foundation, Helsinki. 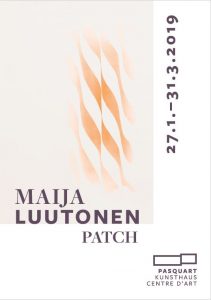