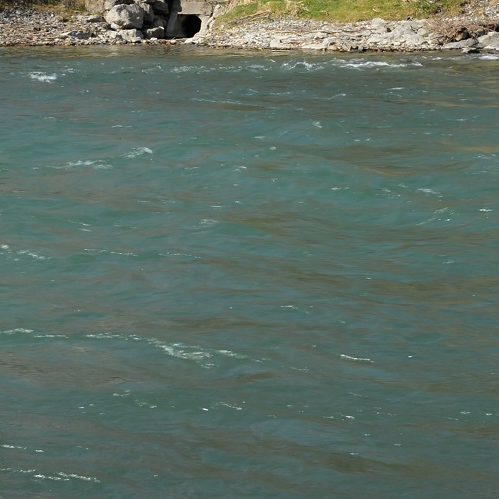 Livia Di Giovanna’s (b. 1984, CH) video installations, photographs and objects subtly eliminate the boundaries between reality, projection and reflexion. Her investigations of space, time, architecture, movement and light are based on decisions concerning dimensions, scale and volume, the production and direction of light, the character of surfaces and spatial relationships. In her earlier works she focused primarily on the physical and technical characteristics of her chosen materials rather than engaging in narrative allusions or representations of the external world. In contrast, the two new video installations produced especially for this exhibition demonstrate the artist’s interest in the connection between the real and the imaginary by subtly deconstructing subject matter from her environment. When Livia Di Giovanna demonstrates the surreal and strange in apparently normal areas of the real world it becomes apparent which aspect is central in these works: the investigation of the medium of video itself. The exhibition marks Livia Di Giovanna’s receipt of the Manor Art Prize 2016 for the Canton of Bern and is her most comprehensive solo show to date.

The two new video installations Ufer (2017) and À l’intérieur (2017) that Livia Di Giovanna has produced among others for the exhibition at the Kunsthaus Pasquart are a further development of her engagement with the conditions of the medium. Although both works combine the moving image, a visualisation of the passing of time and the relationship between light and movement, they are less abstract than previous pieces, each of them based on the recording of a real situation. The video Ufer consists of a 12-metre-long row of 16 abutting monitors. It shows a flowing river, recorded section by section, accompanied by 16 sounds of rushing water. Although the artist connected the fragments as accurately as possible to convey the initial impression of a single recording, this is swiftly disrupted by the realisation that the individual shots were taken at different times and are therefore unsynchronised.

Di Giovanna sets up a dialogue between her objects and their environment. Her precisely angled installations of film projections and three-dimensional geometric objects cleverly eliminate the boundaries between reality, projection and reflexion, while sculptural works that include glass and mirrors juxtapose and fuse reflections of both themselves and their environment. For example, Offroader (2014), a wooden wheel placed stationary on the floor, recalls a disused piece of apparatus from an observatory or the central fixture for a roll of film, the work’s reflection of its surroundings suggesting that a new future function is possible. Similarly, a new work, Ohne Titel (2017) shows a converted table and refers to the conditions of film and photography by suggesting a potential piece of projection equipment or recalling a Camera Obscura.

It is the inherent properties of her materials, as well as their potential, alone or in combination, to create space, that Di Giovanna is interested in exploring. The recent video showing a plumb bob spinning on its own axis, Lot (2017), transforms the circular movement determined by the form and weight of a simple object into an essentially sculptural experience. In a kind of reverse process, the video Silberball (2017) was made by the camera turning slowly around all sides of a ball lying on the floor. The varying tempo of the rubber ball in Ohne Titel (2013) produces a moving line drawing rather than a sculpture.

Light lies at the heart of Di Giovanna’s investigation of how materials interact with each other, respond to movement or are captured by the camera. Not only are light sources and reflections on various surfaces a consistent feature of her videos, but light as an autonomous entity is frequently the central theme, for example the constantly changing form of the plastic bag, filled with air, in the video Ohne Titel (2012). Di Giovanna’s experiments with overhead projectors further reduce the components she needs to make art. Ohne Titel (2011) consists of an overhead projector used to project a glass bottle onto a wall. Whereas this process is logical in the case of script or drawings, when used to transform a three-dimensional object into a flat image, the dimensions, proportions and even colour of the original are oddly distorted. The immateriality of the projection in this work is wittily turned into material in Ohne Titel (2009), in which a large rectangle of white paint applied to the wall simulates an empty projection surface. The narrow bands of colour that edge the white emphasise the impression of the empty space as imperfectly projected light.

In Di Giovanna’s other new installation for the exhibition, À l`intérieur, the ways in which reality is recorded and communicated are much less tangible, placing our perception fundamentally in question. In total darkness, with the only light emitting from a pocket torch to make isolated objects or details of the space visible momentarily, the artist filmed the interior of her studio. In the equally blacked-out exhibition space, the film is projected in a double 16:9 format. In spite of the one-to-one scale relationship established between the projected room, the real room and the observer, the most basic of objects appear strange and unfamiliar. Since the space can never be seen as a whole, it is only in the imagination of the observer that it can become an entity.