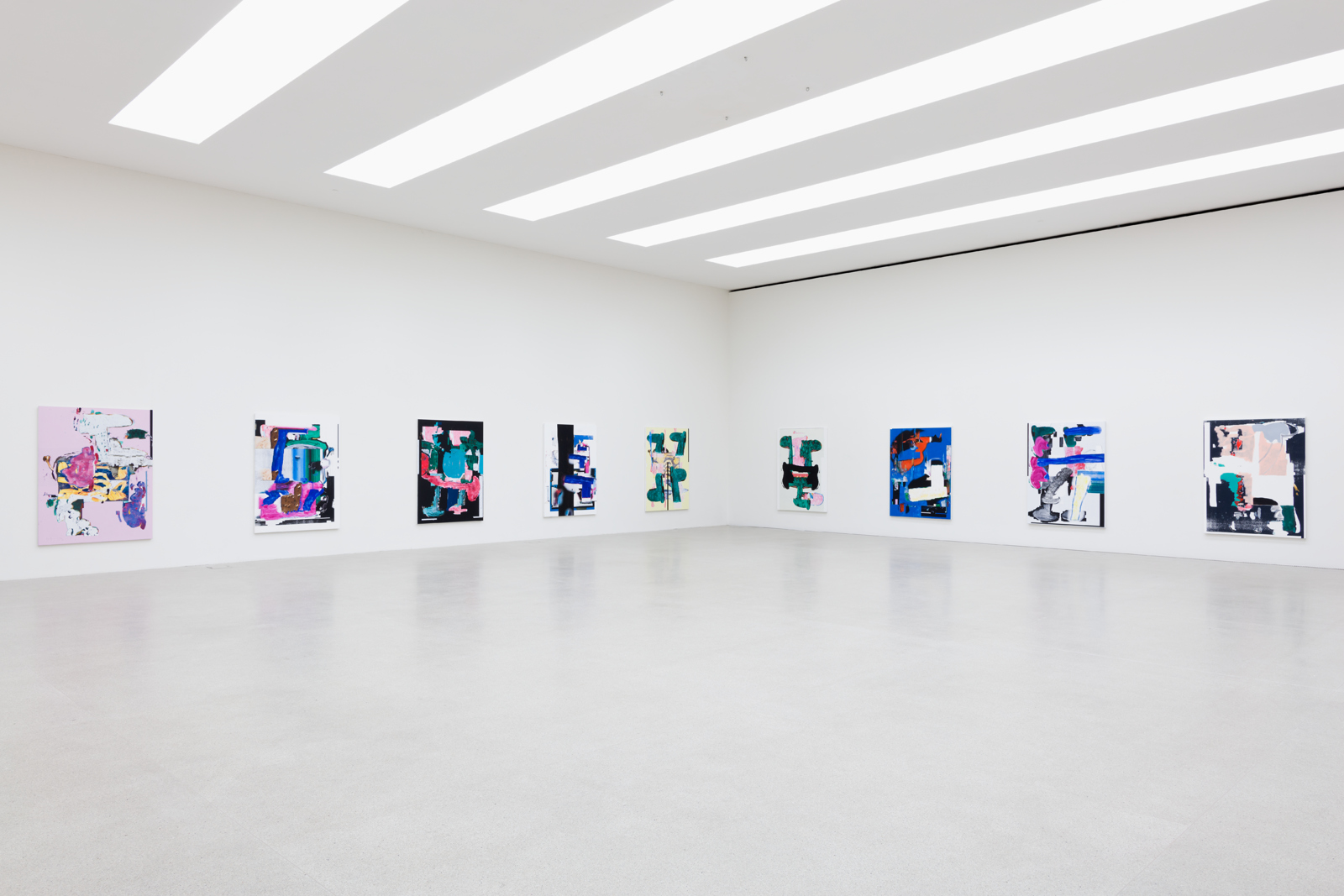 The work of the artist duo from Biel, Linus Bill + Adrien Horni (both b. 1982, CH) is the result of a dynamic process which is particularly evident in the most recent series Heredity Paintings. Inspired by works they have rejected in the past, the artists take details from these paintings and transfer them to the computer. With image processing programmes, Bill and Horni transform the photographed fragments independently from one another and send each other the data for the next stages of the work. They swap complementary colours, distort forms and experiment with painting tools. The unintentional effects produced by the digital processing as well as the individual renunciation of control over the artistic process refer to the artists’ interest in the unforeseen. For the exhibition Bill and Horni have selected from more than 1500 of the resulting examples around twenty variations which they have transfered to painting and silkscreen on canvas. Between repetition, modification and layering, the artists test the concept of heredity and in this way question the relationship between the varied forms that appear in different paintings in a multitude of ways. Across a number of works these images in the end develop a life of their own and thus elude a single reading.

The varyed motifs in the paintings of Linus Bill + Adrien Horni are held in a precarious balance. They appear to transform before our eyes and escape our gaze. The comic-like forms and ambiguous textures are lively and erratic. The colourful fragments of images suggest they have no intention of staying in the picture and are occupying this only temporarily. Although they are abstract compositions, the motifs give the impression of being strange beings and the apparent fleetingness of the painting is further reinforced by their sketchy quality.

The movement within the painting corresponds with the dynamic working process, which leads us to the question of the works’ origin. The series Heredity Paintings can be regarded as the youngest generation of a family that originates from the same three paintings. Bill and Horni talk of these as the «mother images». They are paintings produced with traditional techniques that have not stood the test of time and have ever since been living a lonely existence as discarded works in storage. Since the artists ultimately photograph elements of these rejected paintings and transfer them to their computers in order to work on them digitally, a productivity unfolds that results in hundreds of versions of the image.

The concept of relatedness is also manifest in the connections of the works to each other. The working principle, based on fixed procedures and the sharing of responsibility, creates the pre-condition for this. The artists use Photoshop to work on the motifs, at times alienating these so much that their original character is no longer recognisable. As in a tennis match, Bill and Horni pass each other the digital data back and forth and in this way form the polyvalent structures together. As a consequence of the strict selection process, in the end only a small proportion of the versions of the image are actually translated into the format of 190 x 140 cm. As all the motifs can be traced back to the same mother images, it is particularly when we see the paintings as a group in the monumental Salle Poma that we become aware of their different forms of expression. The series acquires a temporal depth and the narrative between the paintings refers to the central theme of heredity.

While Adrien Horni trained as a graphic artist and Linus Bill studied photography, since their first collaboration – the production of the publication La deuxième chance (2011) – both have been commited to painting as their chosen medium. Their early works stand out for their aesthetic simplicity, recalling the work of Ellsworth Kelly or Ray Parker. At that time the artists were working on an approach to understandings of art that were circulating in the collective memory. However, their most recent works have turned out more complex and indeed more heterogeneous –  a conscious decision to distance themselves more forcibly from possible art historical references and to articulate their own future-oriented vocabulary. The mutual influences of digital and painterly languages are also manifest, due to their effect on one another in the painting, demonstrating the technical adeptness of the duo. With humour, Linus Bill + Adrien Horni compare their by now established collaboration with a training camp, after the conclusion of which they will perhaps be capable of producing a « real » painting. The fact that it is precisely their unconventional approach that accords painting with new impulses, does not escape a certain irony. With their most comprehensive exhibition to date, the artists demonstrate impressively how the long history of painting can continue to be told and its trunk extended with a new green branch.

At the same time as the exhibition at Kunsthaus Pasquart Linus Bill + Adrien Horni are presenting their works at La Salle de bains in Lyon in which copies of the Heredity Paintings from Biel can be seen. A bus tour on 2 June 2018 will being visitors from La Salle de bains to Biel.