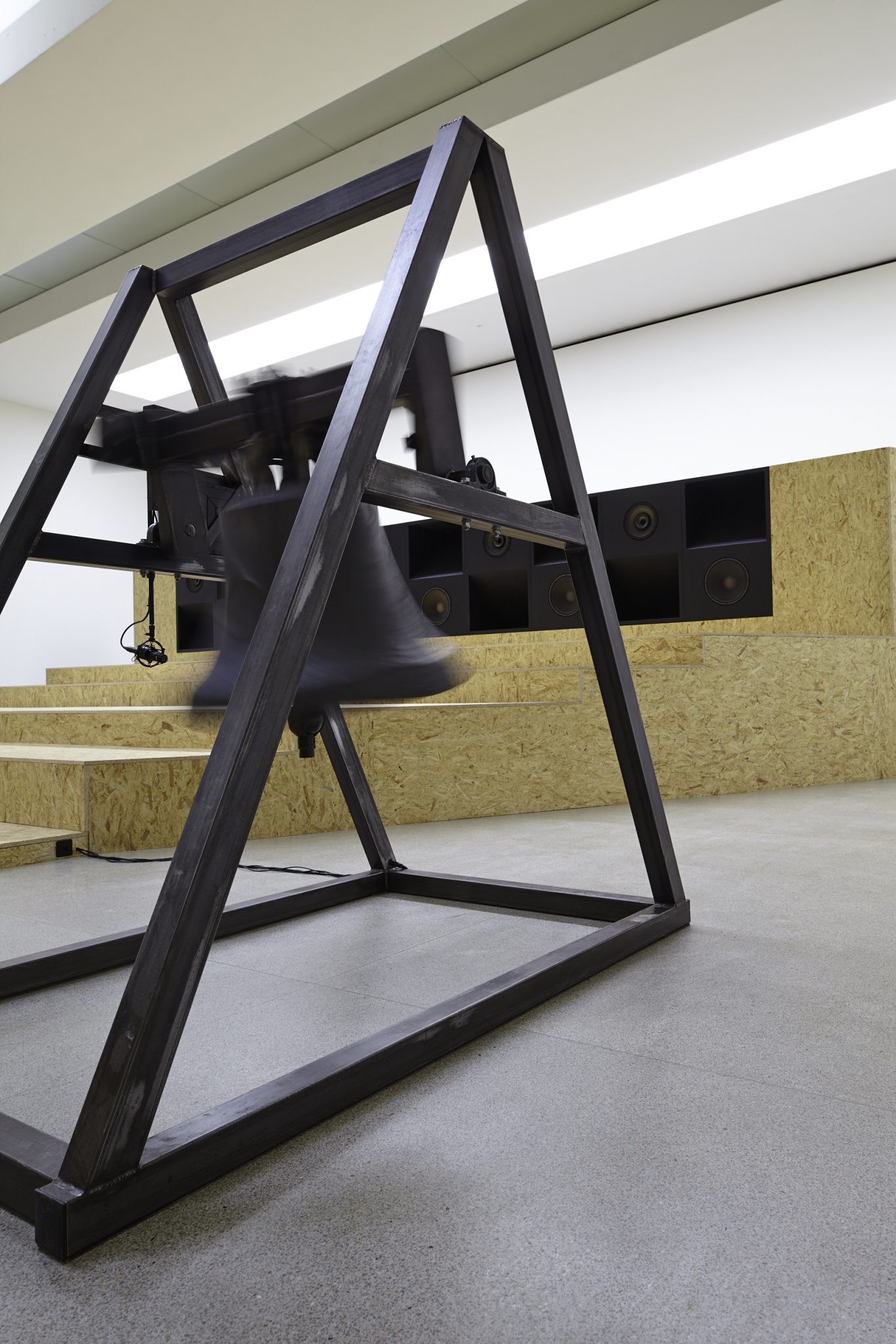 Previously shown in the Polish Pavilion at the Venice Biennale in 2013, the sound sculpture by Konrad Smoleński (b. 1977, Kalisz, Pl) is based primarily on the manipulation of the tolling of a bell, an ancient instrument that has for centuries set the rhythm of our earthly and “eternal” lives. Through the process of transforming the familiar tone of church bells, Smoleński also changes its meaning. Not only does the artist abstract the familiar sound from its usual associations; he also frees the signal from its source by recording it in real time and then processing it with the use of delay and reverberation. As a result, the enormous speakers retransmit the acoustic waves, providing the broadcast sound with a force that affects all persons and objects in its vicinity.

The installation is the result of Smoleński’s explorations combining punk rock aesthetics with the precision and elegance typical of minimalism. In his creation of audio performances and objects, the artist uses both traditional and self-constructed sound devices to examine the flow of energy and its interaction with the audience. By investigating the possibilities of electricity, sound waves and PA systems, the artist manipulates the meanings we usually attribute to rock culture. In doing so, he abandons the linear narration that is characteristic of musical performance, developing an artistic practice that resists the temporal.

A year after the Venice Biennale the installation has evolved as a project for CentrePasquArt in Biel and Zachęta – National Gallery of Art in Warsaw. In each location, the sound sculpture changes to reflect the features of the different spaces, as if adapting to its acoustics like a musical instrument tuned before a performance. The permanent elements are the two hand-made iron bells and the rows of broadband speakers that echo them. The new addition in Everything Was Forever, Until It Was No More – Time Test, the Swiss version of the project, is the vibrating wooden platform that has been designed for the visual and acoustic character of the Salle Poma and will serve as a stage for a number of commissioned performances by renowned musicians. Blurring the distinction between sculpture and sound, each musician will respond to the delayed and processed tones of his own instrument with the accompaniment of the bells.

The sound installation also represents the continuation of Smoleński’s activities in both the music and art scenes, above all his challenges to this traditional division. As the band, BNNT, he and Daniel Szwed have been giving audio performances in urban public spaces, art institutions and festival venues since 2007. Using their van as an improvised stage for so-called sound bombing, the musicians perform in balaclavas or masks and each performance involves a sonic attack with a string instrument modeled on the Tomahawk missile (Smoleński) and a drum set (Szwed).

The original concept for Smoleński’s project was inspired by Julian Barbour’s theories concerning the illusory nature of time. The British theoretical physicist has envisioned a timeless universe, in which the present is perceived as a three-dimensional snapshot, and where the chronological ordering of events is a result of nothing more than our memory of individual “Nows.” Therefore, time, according to Barbour, is but a sensation of temporality, enhanced by records of what we believe to have existed in the past. Other ideas concerning the inaccuracy or exhaustion of the idea of time that have influenced the development of Smolenski’s installation include science-fiction stories and the plays of Samuel Beckett.

The exhibition has been co-curated by the curators of the Polish Pavilion, Daniel Muzyczuk and Agnieszka Pindera, and co-produced by Zachęta – National Gallery of Art in Warsaw, where it will be shown in a different form from 10 October to 16 November 2014.

The exhibition at Kunsthaus CentrePasquArt is also a collaboration with the Kunsthalle Winterthur, which is presenting a selection of new work by Konrad Smolenski from 15 June to 27 July 2014.

Publication: On the occasion of the exhibition, a limited edition LP and accompanying book are being published.