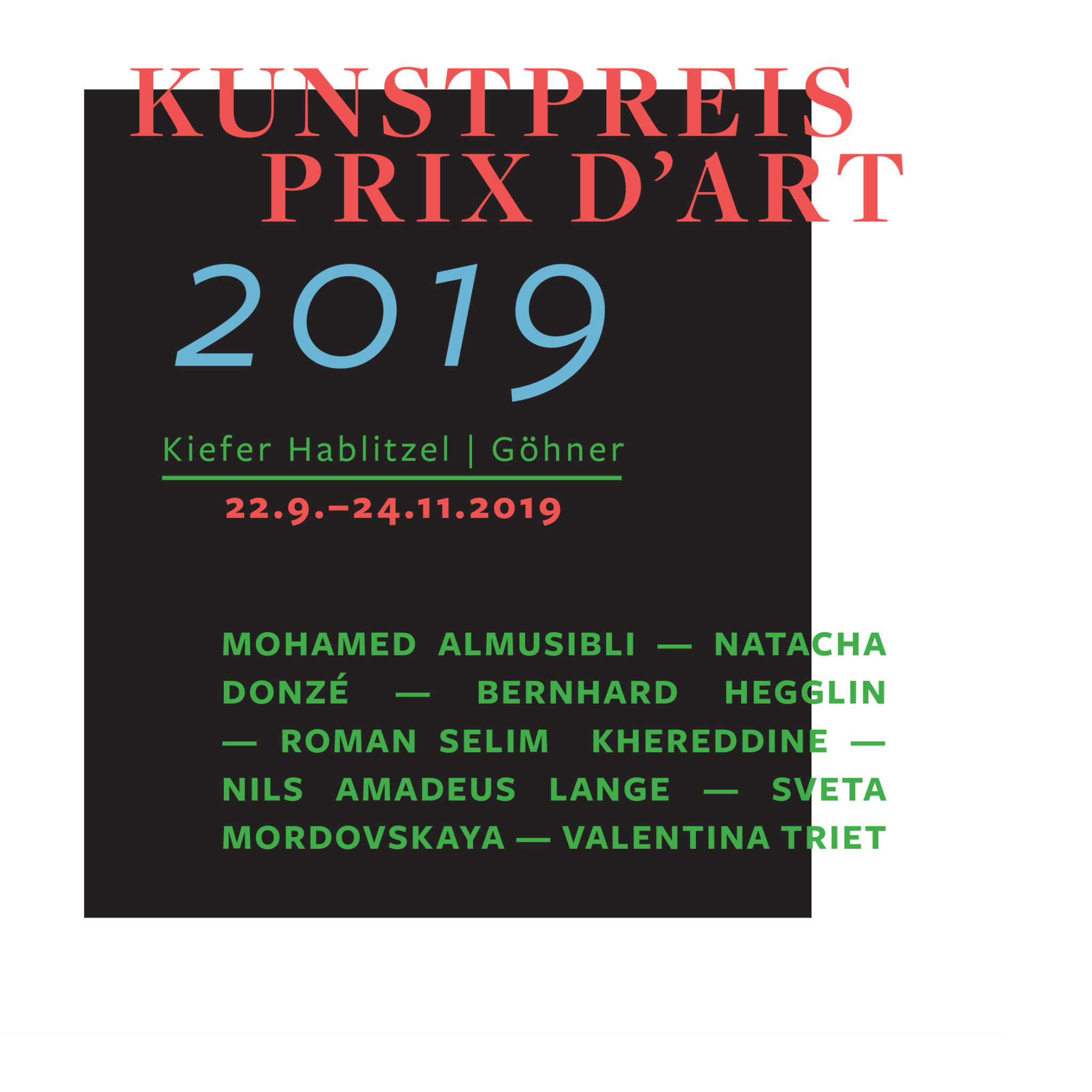 From 229 applications the jury selected 17 artists who were invited to the exhibition within the framework of the Swiss Art Awards in Basel. In a second round 7 of these nominations were awarded with the Kiefer Hablitzel | Göhner Art Prize 2019. From large-scale paintings via multimedia installations to the focus on words, text and narrative, the examination of the body and physical realities, the exhibition conveys an impression of the variety and originality of a new generation of artists working in Switzerland. A publication accompanying the exhibition with short essays by international authors on all the prize-winners is published by the Kiefer Hablitzel and Ernst Göhner Foundation.

The exhibition provides insight into the practices of young Swiss artists, with a focus on new work. The presentation is defined by a broad spectrum of artistic positions and a large variety of media and materials. From large format paintings via drawings and installations to the examination of word, text and narrative as well as the investigation of the body and physical reality, the exhibition gives an impression of the diversity and originality of a new generation of artists in Switzerland.

Mohamed Almusibli (*1990 in Sanaa (YE), works in Geneva and Zurich) makes installations with text and sound. He sees in words the voice which in addition to the linguistic expressions of an individual can also be a message with political potential in the social sphere. His works thus reveal social nuances which he subtly embeds in their spatial context. As a starting point he takes a playlist of Yemen love songs compiled by his mother and translates these in various media. He shows the Arabic lyrics as images, questioning the ways in which history is passed down and how truth is formed. He also addresses the private sphere in the domestic context and the intimacy connected with this.

Natacha Donzé (*1991 in Boudevilliers, works in Lausanne) questions in her work social codes, stereotypes, every day occurrences and fables from popular culture. The compositions of her paintings isolate, repeat or combine form, surface, colour and figurative symbols from the most varied cultural fields. The painter creates a multi-layered formal language in which the relationship between figurative and abstract elements on the evenly painted canvas is left open. For the exhibition she has produced a series of paintings that appropriate architectural room ornaments and thus refer to objects relating to interior decoration, lighting or the luxurious environment of hotel resorts.

Bernhard Hegglin (*1989 in Zurich, works in Zurich) is concerned in his artistic practice with drawing, sculpture and installation. His new metal sculptures develop from the ceiling and into the space as a delicate linear arrangement, transcending the boundaries of drawing and sculpture. At the ends of the metal lines are attached a selection of pages from a « Best of » advertising magazine. The structure fuses pre-existing elements with new additions. Thus the beginning and the end of the artistic creative process remain deliberately indeterminate and ambiguous.

In his work Roman Selim Khereddine (*1989 in Zurich, works in Zurich) treats history as a many-layered construct by re-working existing stories, anecdotes and myths and thus undermining established connections and their claim to truth. He extends his paintings with the bodies and animals of heads cast in concrete, recalling the methods of taxidermy. He refers on the one hand to the animal as the object of scientific analysis but at the same time also to the fact that as mythical creatures they implicate other methods of story-writing. The fusion of fiction and reality allows him to deconstruct socio-political constellations.

Nils Amadeus Lange (*1989 in Cologne (GER), works in Zurich) is a performer and choreographer. Parallel to his own works he has developed many collaborations with visual artists in the last few years. Lange employs the body as a means of expression and an instrument for the deconstruction of conventions and social models, such as role models and gender clichés. For this exhibition, in addition to a performance he is producing an installation that combines high culture with trivial and popular elements of mass culture. The fusion of High and Low, in combination with the choice of natural materials, produces an effective field of tension.

Sveta Mordovskaya (*1989 in Ulan-Ude (RUS), works in Zurich and Vienna) examines in her drawings and sculptures the relationship of the body to things and materials in our environment. She confronts familiar everyday objects with corporeality, directing her gaze firmly on the composition of objects. The materiality and modelled surfaces recall sediments, fossils or remains of corals, which like geological relics illustrate the traces of time, but also ornamental elements of interior decoration such as frames or wreaths. Ambiguous, poetic seeming works emerge, that oscillate between anthropomorphism and abstraction but refer mostly to the absence of the body.

Valentina Triet (*1991 in Winterthur, works in Zurich and Vienna) is concerned in her work with techniques from the contents of spatial orientation, architecture, social infrastructure and the landscape. She treats various perpectives on a subject which can be implemented in various media – installations, sculpture, texts, photography or film – and develops her own specific narrative. The artist eludes with her artistic practice an unequivocal reading of her work; rather the associative use of everyday materials plays a large role.

Panel discussion: : The art of promotion