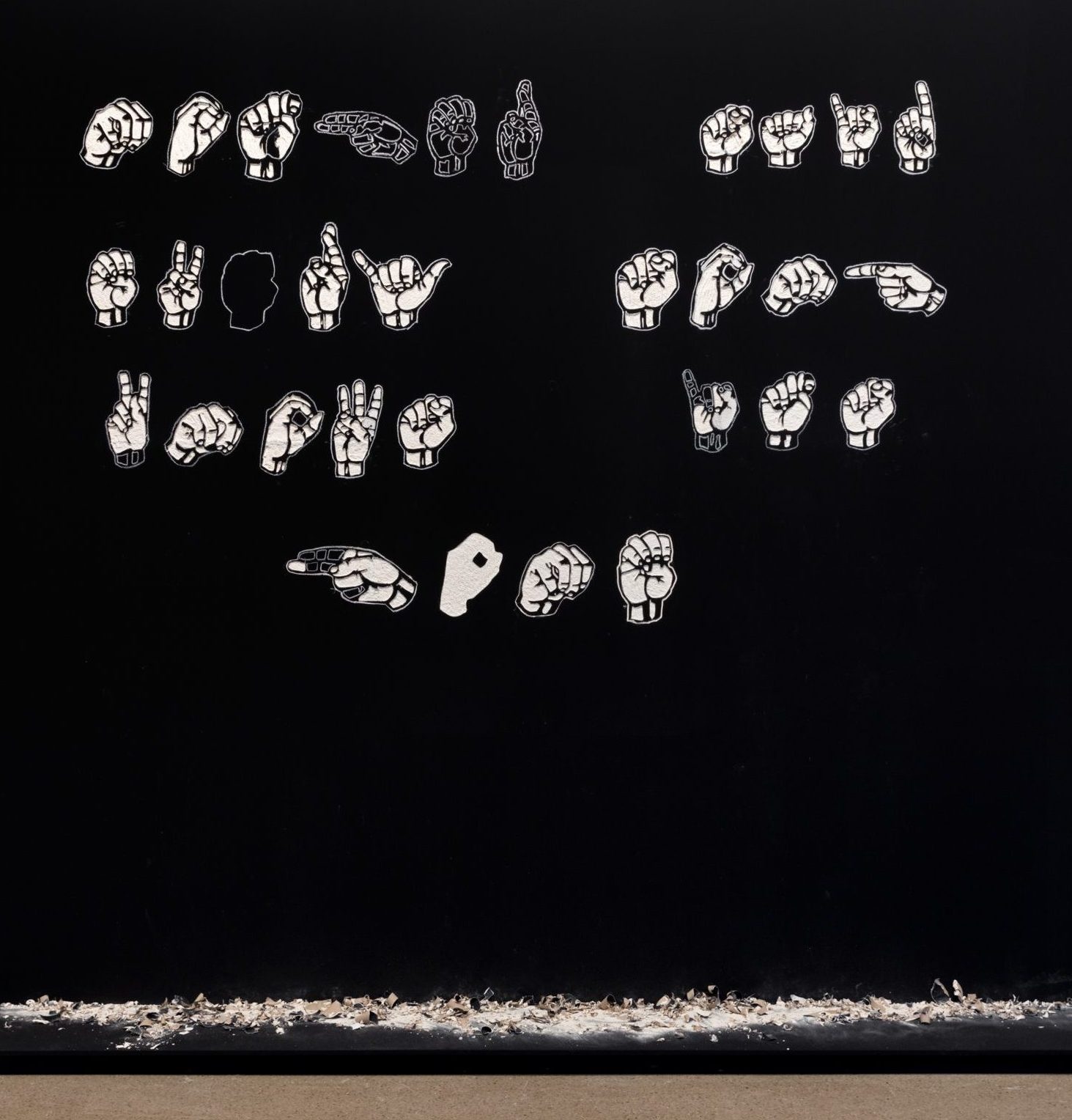 Hand signals engraved in stone, Bibles clamped between false teeth, blurred chalk marks on blackboards, school benches turned into birdhouses. Kemang Wa Lehulere’s (*1984, SA) many-sided work produces haunting, suggestive images, founded in the past of his native country South Africa. Located between an autobiographical search for clues and historical events, the exhibition creates a place of reflection on ideologies in the education system, the instrumentalisation of religion or the erasure of collective memory. He submits his visual narratives to an on-going process of overwriting and reconstruction. Beyond the examination of South African history his drawings, performances, installations and videos also have an impact that extends to the questions of our time. The force of an associative visual language provokes an awareness of a present that its history has caught up with and which demands the disclosure of differences and prejudices. Like a film script waiting to be implemented, a narrative space opens up in which muted voices have their say again and unfulfilled ways of living become reality.

Kemang Wa Lehulere’s work is articulated through its openness. It stems from the idea that all artistic manifestations develop in collective processes and stand in relation to the historical and social context from which they arise. When, therefore, the artist combines works by artists such as Ernest Mancoba (1904 – 2002, SA) or Gladys Mgudlandlu (1917 – 1979, SA) with his own, he creates a situation in which the borders between past and present, community and individual are dissolved.

Gladys Mgudlandlu, who is considered to be one of the first black female South African artists, made a series of paintings and drawings in the 1960s. Critics described the autodidact’s style of painting as superficial, as she was apparently unaware of the division of races and was commited to using primarily traditional motifs. Based on research for the video Homeless Song 5 (2017), produced with the architect Ilze Wolff, Wa Lehulere concluded, however, that the landscapes that Mgudlandlu shows in the series Untitled (undated) must be illustrations of the hills and huts of Luyolo. At that time the strip of land was declared a living area for whites and its occupants were forcibly re-housed. Furthermore, when Wa Lehulere learnt from his aunt Sophia Lehulere that she knew Mgudlandlu personally, he had her draw from memory her colourful paintings with chalk and small boards and completed these sketches later. In the exhibition he presents the group of works Does This Mirror Have a Memory (1962 – 66 / 2015) which consists of original paintings by Gladys Mgudlandlu and these reconstructions. The autobiographical links become denser due to the aunt’s memories  of wall paintings in the artist’s former block of flats, which Wa Lehulere and a restorer freed from nine layers of plaster and paint and subsequently exposed.

A recurring motif in the artist’s work are porcelain sheep dogs, which can be seen in the site-specific installations Cosmic Interlude Orbit (2016) or Red Winter in Gugulethu (2016). Sheep dogs can still be found today in South African houses, guarding the property of the upper class. Here, the dogs in their upright sitting position look like silent witnesses. However, in spite of their calm there is something menacing about them. Unavoidably the question arises whom the dogs are observing and in what relationship they have with the recycled school tables or the suitcases pierced by crutches – symbols of forms of repression.

Bones stubbornly resist decay and over the decades make the covering up of the traces of past crimes impossible. As a metaphor in the installation Homeless Song 5 (a sketch) (2017) they also refer to the South African author Nat Nakasa (1937 – 1965), who jumped to his death in New York. The grass that was originally used came from his grave. The artist transported pieces of the turf from the USA to South Africa, placed them in the suitcase and let the grass carry on growing, guarded by porcelain sheep dogs.

During apartheid the education system was designed above all else to keep the black population’s horizon of knowledge limited. Mathematics, philosophy and art had no place in the curriculum. Alongside the obstruction of the freedom of speech, through the ban on the mother tongue speaking in a foreign language was also imposed. The group of works My Apologies to Time (2017) reveals mechanisms of conditioning and its translation into an ambivalent state of freedom. Table legs from school desks are turned into steel tube structures and their wooden panels rebuilt as bird houses, thus making them visible as instruments of domestification. The stuffed grey parrot, the most talkative speaker of the parrot family, embodies in a discrepant way formability by impartially imitating various languages and at the same time an apparent independence due to its ability to fly.

The photograph Untitled (2017) shows a bird from the exposed wall painting in Gladys Mgudlandlu’s house. Following its discovery, this triggered Wa Lehulere’s research into birds and their significance during apartheid. Constructed from crutches, the floating Installation Broken Wings (2017) refers to the Biblical fall of humanity, that is to the forcible expulsion from paradise. In this work false teeth clamp Bibles written in the language of the South African people Xhosa. The human rights campaigner Desmond Tutu said in this connection: «When the missionaries came to Africa they had the Bible and we the land. They said : ‹Let’s pray›. We closed our eyes. When we opened them again, we had the Bible and they the land.»

In his first comprehensive institutional solo exhibition in Switzerland Kemang Wa Lehulere refers to far-reaching consequences of repressive systems. He shows how history can’t be re-writen, but through artistic and social intervention can be enlarged to contain more complexity and points of view. Formulated in sign language, the hand symbols engraved in a piece of wall from the work Every Song (2017) read: «Mother said every song knows its home».

The exhibition is a collaboration with the Deutsche Bank, which distinguished Kemang Wa Lehulere with the title «Artist of the Year» 2017. The works from the presentation Bird Song, which on the occasion of the distinction were shown in the Deutsche Bank Kunst Halle in Berlin and at MAXXI in Rome, form part of the exhibition at Kunsthaus Pasquart.