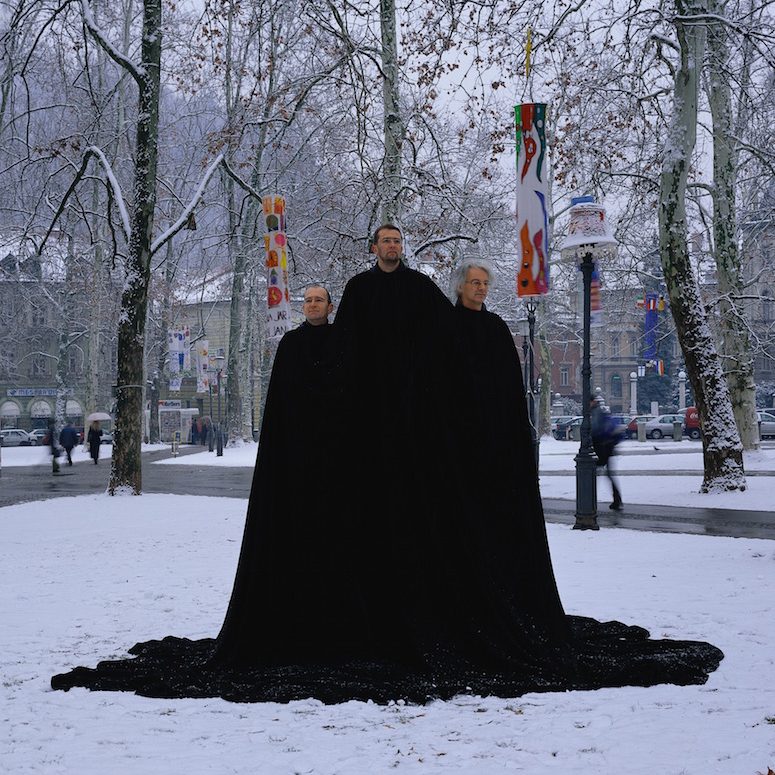 How to Read a Map

IRWIN is the name of a five-person Slovenian artists’ collective that has been collaborating on numerous groundbreaking projects both within and outside the group since 1983. How to Read a Map is the fourth and last part of a project spanning several countries, highlighting various aspects of their collaboration, which encompass a wide range of media such as photography, film, installation, interventions in the public space, painting and publications. From the beginning IRWIN has focused on the relationship, interplay and forms of representation of art and ideology. Their working method requires that each member of the group retains their own artistic form of expression and that at the same time room remains for collaborations with other artists such as Marina Abramović, Andres Serrano, Joseph Beuys or the interdisciplinary collective Neue Slowenische Kunst (New Slovenian Art), NSK for short, founded in 1984. Collaboration and exchange are the basis of both collectives that positioned themselves in the political and cultural scene of the former Socialist Federal Republic of Yugoslavia. Their work is based on an uncompromising analysis and deliberate appropriation of icons as well as political or religious symbols. They question the absolutist claims of these in provocative and ironic ways and deconstruct propaganda strategies by examining the connotations and effectiveness of signs and images and the related social systems.

Following the breakdown of Eastern Europe and the bloody collapse of Yugoslavia the transformation of the Neue Slowenische Kunst (New Slovenian Art) into the NSK State in Time – a utopian state with neither borders nor territory – occurred in 1992. Anyone can join it by acquiring a passport, for its goal is the questioning of nations, identities and borders. In the meantime the NSK State in Time has 15’000 supporters and has made an appearance over and again via various art actions. Among these are the temporary embassies and consulates that have taken place in numerous cities such as Moscow, New York and Berlin and of which one is now opening at the Kunsthaus Pasquart. The debut of the NSK State Pavillon at this year’s Venice Biennale was certainly the highlight to date of this quest.

A key aspect of IRWIN’s by now decade-long activity is their preoccupation with the writing of art history and the examination of how far this too is the product of ideological thinking. At the start of the new century IRWIN began with the work East Art Map to analyse the art history of Eastern Europe: in the context of a comprehensive publication and an interactive website the art of eastern Europe since 1945, which until the 90s had largely been ignored, was systematically (re)constructed and put in context. It is obvious that as part of this the approach to the writing of Western art history up to this point had to be revised. IRWIN’s decision to organise the first non-national pavilion at the Venice Biennale in 2017 was a new milestone in their institutional critic’s x-ray of ideologies.

How to Read a Map gives an overview of IRWIN’s investigations of the ways in which geo-political developments are reflected in the writing of art history and demonstrates the collective’s biting humour in their approach to the power structures of the art world. IRWIN first came to Biel in 2009 in the context of Utopics, the 11th Swiss Sculpture Exhibition where they showed Outlook: Words from Africa. Examining migration and its causes, this installation in the public space contained a collection of numerous emails in which inhabitants of the African continent had contacted the NSK State in Time. Now IRWIN is returning to the city with a large exhibition at the Pasquart, the fourth and last part of an exhibition cycle in cooperation with the Galleria civica di Modena, Kunsthalle Osnabrück and the Łaźnia Centre for Contemporary Art Danzig.

Curators of the exhibition

The exhibition is accompanied by a publication in the form of an entertaining « IRWIN glossary », assembled by the exhibition curators and published by the Verlag für moderne Kunst (DT / FR).