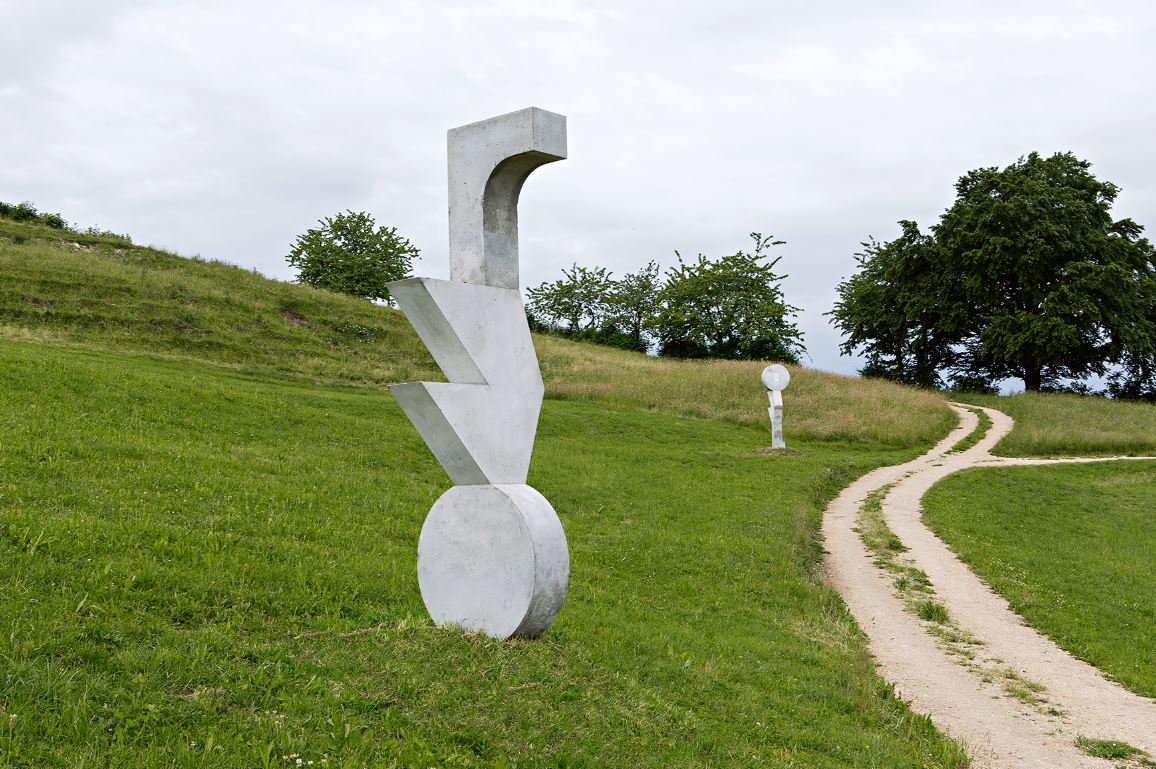 Florian Graf (b. 1980, CH) examines in his work themes connected with architecture and landscape architecture and thus investigates the psychological and emotional impact of spaces. Via sculpture, installation, drawing, video or photography he creates moments of poetic density, in which the borders between reality and imagination are dissolved. In the garden of the Kunsthaus Florian Graf has installed three concrete sculptures, each constructed from three very different basic forms. A circle, an L-form and a jagged figure also function as the building blocks of ceramic models, a photographic work and a series of drawings. Applied in a variety of ways, these structures differ from each other in terms of their composition, size and placement and make reference to the artist’s considerations of new modular social structures. Finally, he has connected these three forms to create large-scale sculptures in aluminium, staging these spectacularly in the monumental Salle Poma. The further exhibition spaces are transformed by the artist into a living situation, in which his seemingly documentary films are presented alongside the other works. In these Graf plays his alter ego, the action artist Graphenheim, thereby parodying himself. Between conceptual logic, visionary power and subtle humour, Florian Graf examines the appropriation of bodies, role models and living spaces, creating a lively construct from imagination, materiality and temporality.

In his most comprehensive solo exhibition to date Florian Graf accords the drawing books (1988-2018) a central significance, thereby giving us insight into his artistic thought processes. Situated between idea and work, these books acquire a special meaning, since they serve simultaneously as an explanatory model for his work as well as for his stance as an artist. Their content spans sketches for sculptures to conceptual experiments. Between observation and imagination, they refer with playful seriousness to the changing nature of social structures and incite us to consider the world with a questioning gaze.

Florian Graf also considers the series Bio Diversity (2018) to be a changeable structure. These works exist in various dimensions and materials and are always composed from a circle, an L-form and a jagged figure. Installed on the grass in front of the Kunsthaus, the concrete figures appear like small buildings, which because of their openings suggest a supposed inner life. The artist produces modifications of these objects in wood in the size of humans. In their allusion to the human body, they almost appear confrontational. The presence of the three large-format objects in the Salle Poma is achieved by the artist through their materiality in aluminium and the asymmetrical installation in the space. Made in three different colours, due to their placement on a base of organic matter they evoke a game between artificiality and naturalness. Graf highlights the multi-faceted character of the model with a three-part group of ceramic objects. Here, however, the model does not take the role of representing the original. It is rather an autonomous work which in the dialogue with its big sisters can be both the design for a future prototype as well as a study subject. We also discover an ambivalence in the photographs, drawings and text works, which in a variety of ways ground these three basic forms in different combinations. Through the aspect of display, materiality or reception Bio Diversity ultimately examines the potential of a changing architectural corpus and thus becomes the leitmotif of the exhibition.

In his videos about the fictional character Olf Graphenheim, Florian Graf shows that the human body can also be regarded as a container of identities and emotions. Played by the artist himself, Graphenheim appears in the videos Air (2010) or Animistic (2015) as an irritating character, creating works of earth-shattering proportions. The witty humour displayed in these videos runs subtly through Florian Graf’s entire œuvre, lending it roguishness and astuteness. These characteristics are also recognisable in the photograph Transfixed (2011). We see here a hammer in which a nail is fixed. Intuitively we ask ourselves how this is possible, forgetting though that the nail could also have been driven into the wooden handle with another hammer. The work Door in Gray (2018) takes as its theme the image in the object and shifts the imagination into reality. When we consider the framed work from a certain distance, it appears to be a photograph. It is only when we approach the work that we recognise that it is in fact a framed door. As observers we are included via our movement and response as part of the work.

Beyond questions concerning the contemplation of art Florian Graf creates with this exhibition a place that questions the museum context as such. When the artist arranges a living situation with furniture placed around the works, an almost cosy environment is created that encourages the visitor to stay and makes us almost forget that we are in an exhibition space. He thus fosters a new way of looking at art and demonstrates that the idea of changeability can be articulated in many different ways.

After studying architecture at the ETH Zürich Florian Graf studied fine art at the Royal Drawing School, London, Edinburgh College of Art and the School of the Art Institute of Chicago. He lives and works in Basel. Numerous exhibitions have been dedicated to his work, among others at the Abbatiale de Bellelay (2011), the Zeppelin Museum, Friedrichshafen (2012) and the Kunsthalle St. Gallen (2015). Prizes and awards include: Cahier d’Artistes (2010), Fellow of the Sommerakademie, Zentrum Paul Klee (2012), 2013 Swiss Art Award (2013) and Residency Künstlerhaus Schloss Balmoral (2018). The presentation at Kunsthaus Pasquart is his most comprehensive solo exhibition to date. 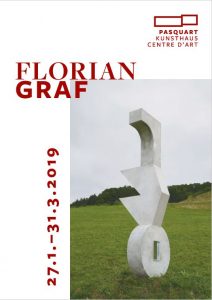