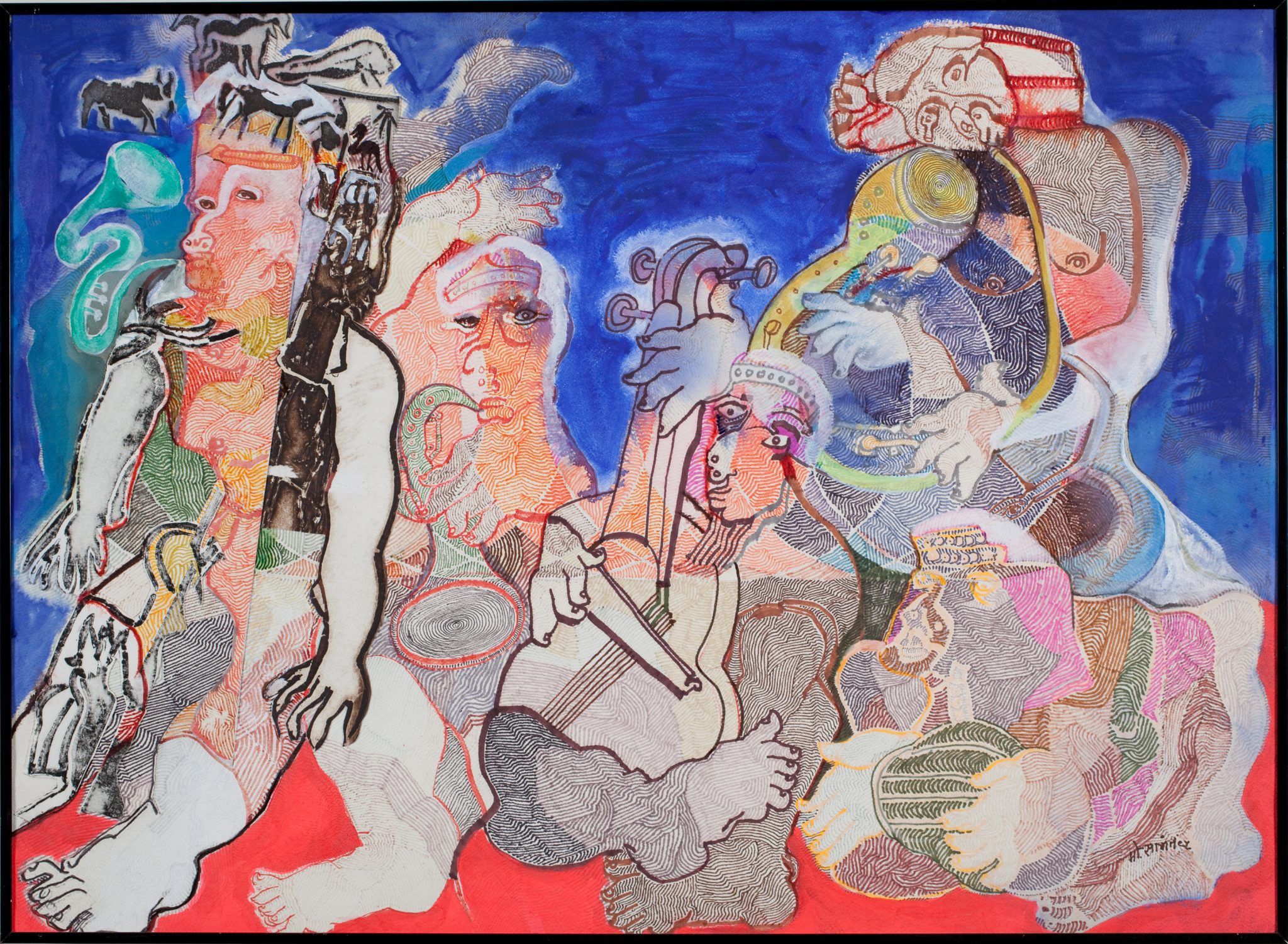 EVERYTHING WE DO IS MUSIC

EVERYTHING WE DO IS MUSIC

The exhibition Everything we do is music shows how classical Indian music has influenced visual art across generations and borders. Early Indian miniature paintings (Ragamalas), contemporary works by Sarnath Banerjee, Prabhavathi Meppayil or Michael Müller as well as works by an older generation of artists from India, Pakistan, Argentinia or the USA are brought together in the exhibition. In the Ragamalas from the 17th century the depiction of the Raga, the basic melodic structure of Indian music, is a central motif. Ragas consist of a selection of five to seven notes, open space for improvisations and contain a main note to which the singer repeatedly returns. Following this tradition, artists working in drawing, performance or animation express the features of Indian music, thereby making it possible to experience the connection between music and contemporary art. The rhythm in image and sound gives way to figurative and abstract visual languages. Works with the most different temporal and geographical origins enter into a mutually reinforcing dialogue.

In April 1955 American television broadcast a performance by the Sarod player, Ali Akbar Khan and brought millions of viewers into contact with the Indian sounds. Ten years later the Beatles released the song Norwegian Wood on the album Rubber Soul. This was the first time in the history of pop music that a Sitar was heard. Since then Indian music has been a staple element of film or pop music, inspiring a multitude of artists. The composer and artist John Cage, for example, took on rules of improvisation, strategies which in the 1950s and 60s were also popular with visual artists. Above and beyond this, through the influence of the Indian musician Geeta Sarabhai, Cage recognised that the meaning of this music consisted in « purifying and calming the spirit so that it is receptive to holy influences ». This awareness is linked to Cage’s quotation « Everything we do is music» and suggests that the goal of the artists in the exhibition is not to decipher Indian music but to linger in it.

The exhibition is structured on the figurative concepts of the Ragamalas, which came into being as early as the second half of the 15th century. The musical motifs can be grouped under the presentation of musicians and dancers or the visualisation of an associated atmosphere of the Raga. The wealth of these musical images is particularly evident in the works of Mohan Samant (1924 – 2004, IN). His vivacious drawings show figures merging with each other and thus become the epitome of the presentation of classical Indian music. This aspect is reinforced further in Shahzia Sikander’s (b. 1969, PK) filmic settings. The overarching subject of Francesco Clemente’s (b. 1952, IT) watercolours is metamorphosis; they are charged with an atmosphere that captures the transition between various states of consciousness. In his drawings Sarnath Banerjee (b. 1972, IN) depicts the emotional vicissitudes of the Raga and chooses for this a figurative rather than an abstract approach.

The direct translation of music and its rhythms into a personal form of mark-making can be observed in the work of artists such as Hetain Patel (b. 1980, GB), Claudio Caldini (b. 1952, AR), Vidya Sagar (1938 – 2016, PK), Dayanita Singh (b. 1961, IN) and Sabah Husain (b. 1959, PK). Claudio Caldini’s film opens out into stroboscopically flimmering sequences, structured on a Raga soundtrack. The rhythm of the tabla is embodied in Hetain Patel’s filmic performance. With every beat of the tabla, using improvised movements he paints signs in red kanku pigment on the skin of his naked torso. He thus allows a strange ritual to develop that is entirely inspired by the music.

The exhibition also unites pieces in which it is not possible to recognise forms of expression of Indian music but which work visually on basic improvisatory forms of music, for example the drawings of Nasreen Mohamedi (1937 – 1990, IN) and Lala Rukh (b. 1948 – 2017, PK) or the gesso works of Prabhavathi Meppayil (b.1965, IN). In addition, the question is addressed as to the influence classical Indian music had on significant American artists such as Lee Mullican (1919 – 1998, US) and Marian Zazeela (b. 1940, US) or the French artist Tania Mouraud (b.1942, FR). In connection with this, Mouraud made a series of white, sensorially illuminated spaces in which the musicians Pandit Pran Nath and Terry Riley as well as the artists La Monte Young and Zazeela were invited to perform.

In Everything we do is music artists give their works a context within which various games of improvisation unfold. They are not interested in adhering to classical Indian music but in understanding it as inspiration in order to achieve insight through the activation of the senses. The creation of a work of art or the production of a sound appear to be related quite impressively as conceptual activities.

In the context of this encounter between art and Indian music Kunsthaus Pasquart is staging the premiere of the piece Raga Moulali Todi for Michael Anthony Müller (Thursday 24.5.2018). This is a composition by the musician Matyas Wolter, inspired by the works of Michael Müller (b.1970, DE), which in turn were created while the artist was listening to Raga music. Ensemble Phoenix from Basel also broadens the spectrum of the exhibition with the presentation of Raga interpretations (Friday 18.5 and Monday 28.5.2018).

The exhibition is accompanied by a richly illustrated publication with texts by Kate Macfarlane, Shanay Jhaveri (Ger/Fr/Engl), Alexander Keefe and Saira Ansari (Engl).

Everything we do is music_LOW