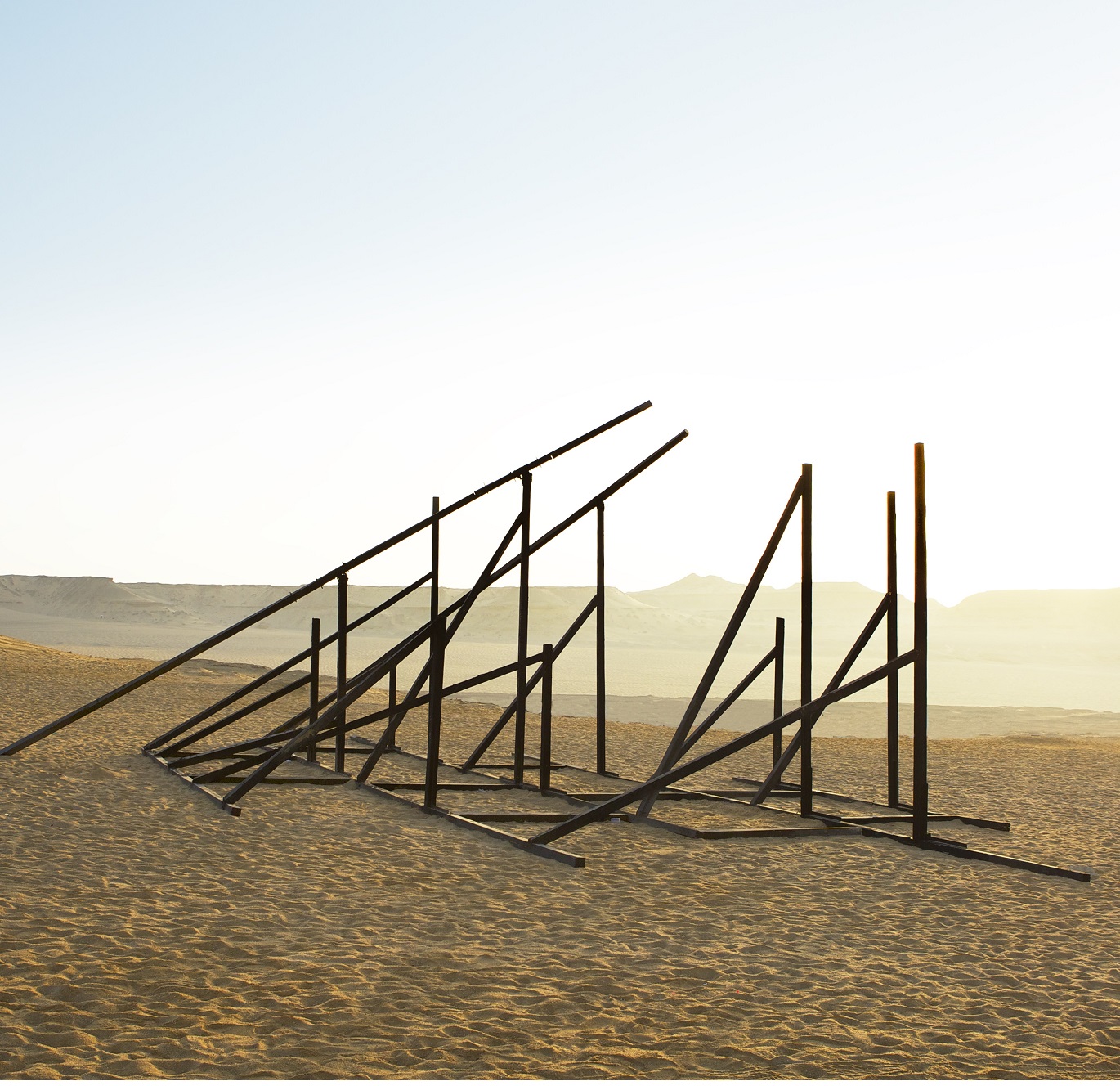 The novel Der einzige Ort by Thomas Stangl tells the story of two men who at the beginning of the 19th century blaze a trail to the city of Timbuctoo, shrouded in legend. As a representative of the super power Great Britain the Scotsman Alexander Gordon Laing travels from Tripolis through the Sahara. The Frenchman René Caillié, a baker’s son, crosses Guinea and Mali. Will they reach their destination and at what price? During four evenings Ariane Gaffron and Stefan Liebermann’s dramatised version for four actors invites us to immerse ourselves in an unpredictable and compelling world. The field reports bring captivating figures to life, make cultures clash and connect mythology with the history of Africa. The Lausanne artist, Sandrine Pelletier (b, 1976, CH) is creating an all-encompassing installation for the project, which will develop further between the four performances. With various materials such as beams or mirrored surfaces, an architecture of emptiness arises that at the same time becomes a stage for the excessive spoken performance. Between desire and fulfillment, language and visual art clash and unite as an interdisciplinary art event.

With his novel about Africa, Der einzige Ort, published in 2004, the Viennese author Thomas Stangl, who read at the Solothurner Literaturtagen three years ago, achieved his big breakthrough. Ariane Gaffron, from 2002 to 2007 Director of Acting at the Theater Biel-Solothurn, and the Berlin actor Stefan Liebermann have developed a live version of the remarkable novel for narration and acting, an excessive speech performance for literature enthusiasts, theatre fans, travellers to Africa and anyone wishing to immerse themselves in a strange world. Over four performances two travel stories, independent of each other and based on facts, unfold, worked by Thomas Stangl into a fascinating linguistic work of art. Four actors invite us to participate in the compelling field reports, bring situations and figures to life, reflect on being and language, and delve into the mythology and history of Africa.

In the Salle Poma, the venue where the narrative is taking place, Sandrine Pelletier has made an open, walk-in sculpture which changes between the performances. She is dismantling her construction little by little, allowing alternative versions of the work to form. During these developments the installation always remains accessible to the actors and visitors; it can be crossed, touched and walked around. Emblematic of a popular culture whose destabilising characteristic is discontinuity and in whose tearing pace the danger of self-destruction resonates, Sandrine Pelletier reflects the image of a regressive development in society. The dwellings of White Trash or a tornado’s swath of destruction can be drawn on as a comparison. With her site-specific, ephemeral installations Sandrine Pelletier examines the material strain of wood, glass, textile or ceramics. When she pushes her basic materials to the limits of endurance, physical tensions are also thereby revealed. The premonition of a collapse is never far away. The process that the installation goes through always remains tangible.

A production by Verein Der einzige Ort in collaboration with Kunsthaus Pasquart Biel and the Philosophicum im Ackermannshof Basel.

In 1826 the Scotsman Alexander Gordon Laing comes to Tripolis. From there he wants to set out for Timbuctoo, shrouded in mystery. He stays in the house of the British consulate and his family while the necessary travel arrangements are to be made and a reliable escort trained. In 1828 the village of Cambaya in the Fouta Diallon is one of the first stops of the young Frenchman René Caillié, a baker’s son from the Charente who is travelling in the opposite direction to Timbuctoo. In order to be able to write his travel report unhindered he calls himself Abdallah and poses as a Muslim.

Unable to travel due to illness, Caillié fights for his life in the town of Tiémé in the house of a local who looks after him. On his way through the desert Laing is confronted with every unpredictable occurence during the journey and the ambivalence of his cultural self-image.

The experiences and encounters that Caillié has in the island town of Dienne at the Niger delta surprise him. Laing (or what’s left of him) continues on his way. In the oasis Blad Sidi Mohammed he at first finds calm and protection.