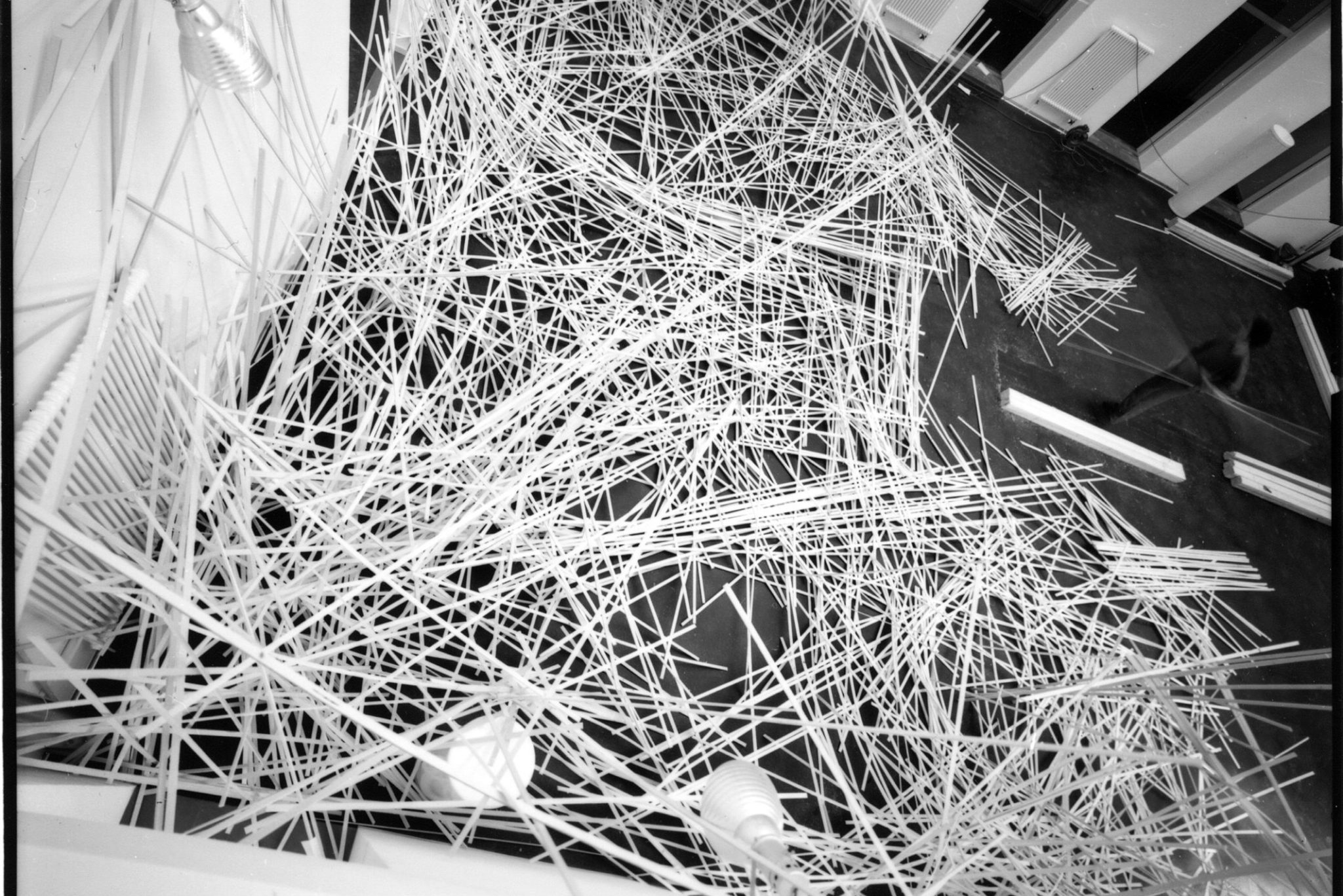 Daniel Zimmermann (b. 1966, CH) is a visual artist and film-maker. His films, installations and performances touch the interface between visual art and action. The artist reacts to situations and environments and questions the meaning and sustainability of human behaviour. The Swiss artist’s one-person exhibition is his first retrospective. It presents the new film installation Walden in the context of older videos, photographs and installations that through their juxtaposition emphasise the diversity of his practice. A publication on Walden will accompany the exhibition.

Shortly before digging in preparation for the extension to the Kunsthaus Pasquart, in 1998 Daniel Zimmermann, who at the time lived and worked in Biel, laid out a structural area with 10’000 wooden strips. The ground plan of the extension determined the form and the size of the work. Within this limited space he created over eight days free constellations, independent from any rules. The artist carried out this physically tiring ritual as though he was playing an oversized Mikado. The structural field refers to the situation that was about to change and the designation of the extension as a Kunsthaus. Zimmermann has produced a red thread through the exhibition with the wooden strips by making them appear over and again as photographic elements in different forms. The 3-D panorama-viewers Strukturfeld Kunsthaus Pasquart (1998/2000) recall the work, for example. The exhibition presents the documentation of these site-specific interventions, whilst in the foyer – as a memory of the situation more than 20 years ago – the 10’000 wooden strips, which the artist also used for other works, are shown as a stack bound together.

Daniel Zimmermann’s latest work Walden (13 Projektionen) (2020) will be shown for the first time at Kunsthaus Pasquart as a 360° film installation consisting of 13 sequence shots from his film Walden (2018). Wooden strips are the protagonists here as well. The installation is a portrait of the places from and to which the stack of wooden strips is transported. The latter makes its journey in the reverse direction of a usual trade route. The transport of the wood, carried out as quickly and efficiently as possible entirely in terms of the economic principle, is framed by the place of origin and the destination of the tree: in the timber of the Benedictine monastery in Admont and in Campinas near Rio Preto, at an indigenous community in the middle of the Amazon. In this way Walden spans two different world systems: in the former the monotheistic Catholicism, in the latter the animist perspectivism, which considers plants, animals and inanimate objects as beings with souls. Between the two is the capitalist economy that connects everything.

Daniel Zimmermann considers the way in which we think and act in specific places or in certain situations and which the defining values are. Through tightly focused, often unusual actions he questions dominant systems of belief and conventions. If at the beginning places in Switzerland and the Alps were at the centre, which the artist connected with the obsession for perfected sporting achievements and the search for the racing line, as in the video works Lauberhornrennen im Sommer (2007) or Stick Climbing (2010), his view became more global in later works. What has become apparent is the artist’s interest in how the different belief systems of various cultures and places collide. WAR (2013), for example, has its point of departure in the Polynesian war dance of the Rapa Nui, a traditional dance form which was at the same time identity forming and acted as a survival strategy. Zimmermann’s work is formed among other things by his examination of politics, in particular with the places of politics. He confronts these situations with the idea of collectivity and belonging. For example in Go and Talk to Your Government: Gründungsakt des Bundesministeriums für Bewegungsangelegenheiten (BMfB) (2009) he was concerned with the government in Austria as the centre of power. He confronted this with the free movement of bodies in space, in order to encourage the potential of physical movement for the enhancement of mental awareness: dancing politicians were suddenly symbols for the fragility of the system.

Performances and stagings are central for Daniel Zimmermann’s work, of which the view on his own practice and the development process of these pieces is a basic part. The exhibition shows several dioramas, such as the four-part work Four Remarks on the History of Dance (2015), which gives the observer the possibility of participating in the artistic process and seeing important places of production. On four small stages scenes take place that retrace the development of the work from journeys by plane, research in the studio, rehearsals and finally the theatre production. As in a historical museum this fluid process is preserved for eternity in the diorama as though it were a historically meaningful event.

Daniel Zimmermann has initiated and carried out numerous art projects in museums, galleries and the public space, such as exhibitions in the Museum Gegenwartskunst, Admont (2019), Kunstraum Niederoesterreich, Vienna (2011), Kunstmuseum Thun (2007), at Haus für Kunst Uri (2006) or Kunsthalle Bern (1999). His projects also consist of films presented at international film festivals such as the Berlinale, the Internationalen Filmfestspielen Rotterdam, the Sundance Film Festival and at the Art of the Real – Film Society of the Lincoln Center, US. He has done performances at NAVE, Santiago de Chile, deSingel, Antwerpen, the ImpulsTanzFestival, Vienna and at the Gessnerallee Zurich. In collaboration with the choreograph Amanda Piña he founded the artist association nadaproductions in 2005, the art and performance space nadalokal in 2009 and in the same year the Austrian Ministry for Movement (BMfB).

The exhibition is accompanied by a publication about Walden, published in Verlag für moderne Kunst (eng). 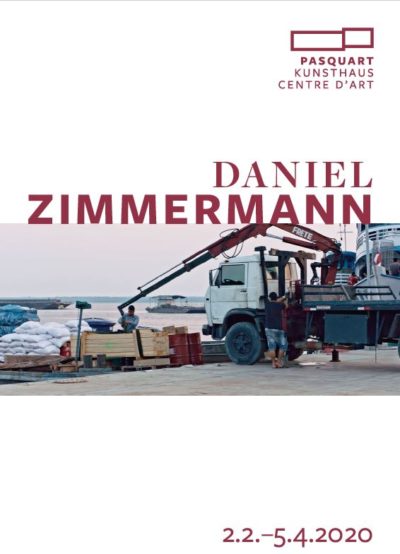