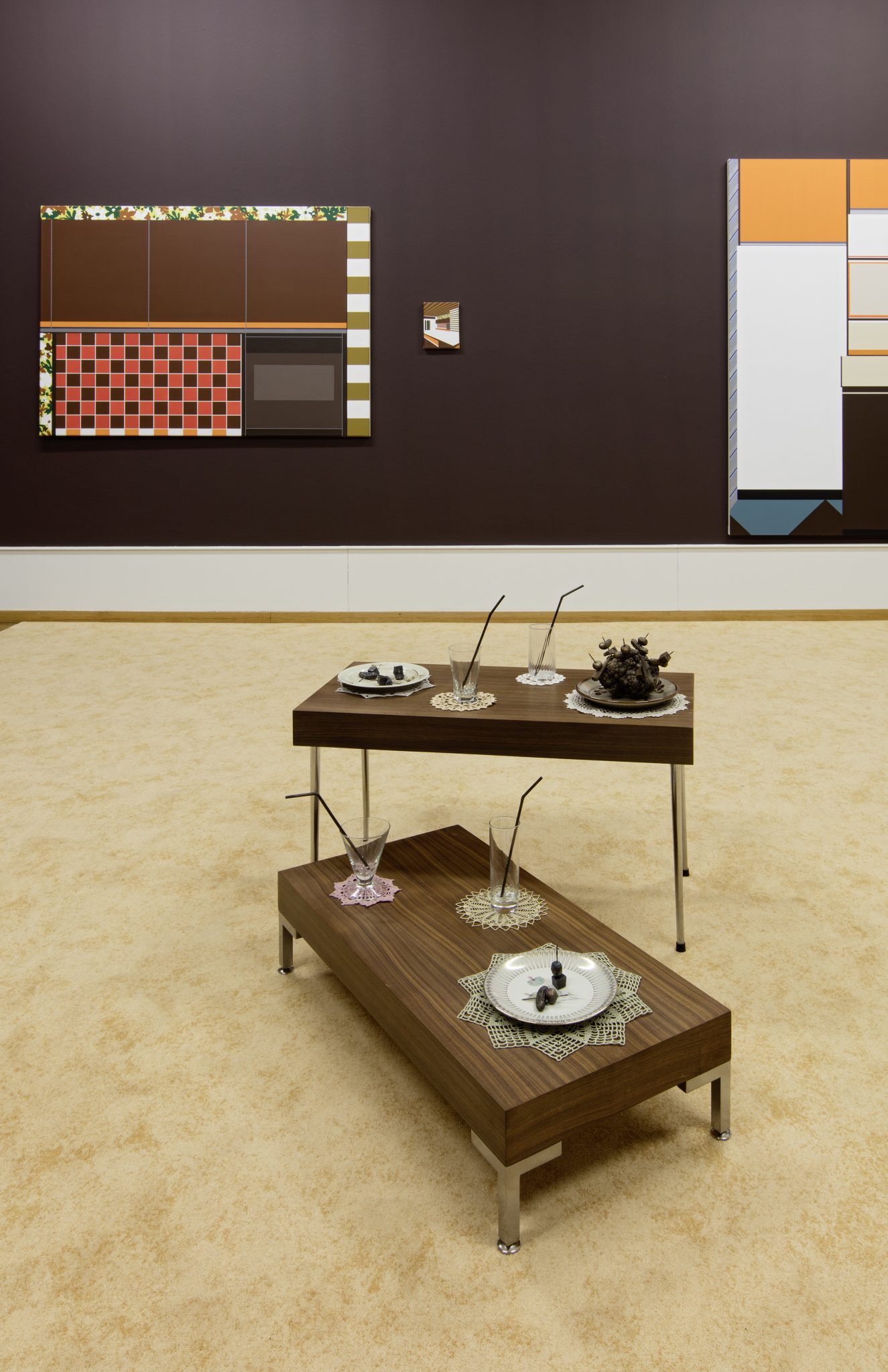 Clare Goodwin’s (*1973, GB) paintings present formally precise, hard-edge compositions, reduced to line, shapes and patterning. Her habit of titling the works with English names common in the past introduces humour and intimacy into the usually austere realm of geometric abstraction. The paintings are thereby imbued with possible narratives as well as references to real and fictional people. Although Goodwin’s work may appear to be situated in the legacy of the Zurich Concrete artists, it is her engagement with an emotional, abstract representation of the external world that distinguishes her approach from their mathematical logic and rejection of the depiction of reality. The exhibition sets up a conversation between a new group of paintings and a selection of older works, as well as bronze objects and recent marble sculptures. These are juxtaposed with a number of spatial interventions throughout the exhibition. Although 10 years apart, these different bodies of work all originate in Goodwin’s reductive approach, often inspired by discarded items dating from the 1970s and 80s. In terms of both their aesthetic qualities and their symbolism, these acquire the status of contemporary “memento mori”.

Although Goodwin is known primarily as a painter, her work crosses over into other areas such as sculpture, wall painting and the integration of objects in spatial situations in which the environment is part of the work. Based on patterns found on old fabric and knick-knacks that convey a certain sense of time, history and loss, her paintings can be regarded as contemporary icons of another era. From the earliest Kitchen Paintings to the most recent works composed of painted shards and slices, Goodwin’s work has undergone a dramatic development. The formal precision of her work and its hard-edge geometric language evolved in the late 1990s. The repeated pattern motifs and compositions based on strong vertical and horizontal lines became a central style in the early 2000s in the Kitchen Paintings, which were based on images from 1970s lifestyle magazines depicting idealized modular kitchens system and interiors.

Goodwin began to develop two new series of paintings in 2011 and 2013, Kiss on the Blue and Unforced Errors. These focussed on a stark formal composition of intersecting stripes, on line and form rather than on tone, giving way eventually to purely black paintings. The floaty washes that the artist started to incorporate in her work in the newest series Curtain Paintings in 2015 were a radical departure. The process used to make these begins with the gestural act of applying ink, the flow of which is interrupted by the superimposed layer of long, narrow diagonal forms in black and grey. Although a stark contrast to the Kitchen Paintings, they also represent a return to these, since their title evokes the ambiguous transition between interior and exterior space. Evoking not only the colours and designs of Goodwin’s growing collection of used clothes, but also the smells of the people who once owned them and the environments in which they might have been worn, these more abstract paintings nonetheless represent tangible aspects of reality.

The notion that her paintings are a form of abstract portraiture is emphasised by Goodwin’s custom of titling her paintings with British names common among adults in the 1970s and 80s. Based on the reduction of a shared history to line and pattern, these works rely on the titles to trigger storytelling. The choice of narratives, some of them potentially romantic or humorous, has an oddly humanising effect on the clean and ordered world of the geometric abstract aesthetic. It also distinguishes Goodwin from the Concrete artists.

Goodwin has always been interested in the space of painting, whether through the architectural environments of the Kitchen Paintings or the illusion of space in the recent compositions. The one-to-one ratio – by which everything depicted is the size it has in reality – is a central factor throughout the artist’s work, while her installations, environments and wall paintings extend the multiple points of view and sense of movement in the paintings. The concept has even been extended to the publication produced to accompany the exhibition, for which Goodwin has made a group of 60 or so coloured paintings for reproduction on a one-to-one scale.

A guitar performance opens the evening. Five authors, including students from the Swiss Literature Institute, University of the Arts Bern, will then read aloud the stories they have written, based on Clare Goodwin’s paintings. The publication produced to accompany the exhibition Constructive Nostalgia will also be launched.