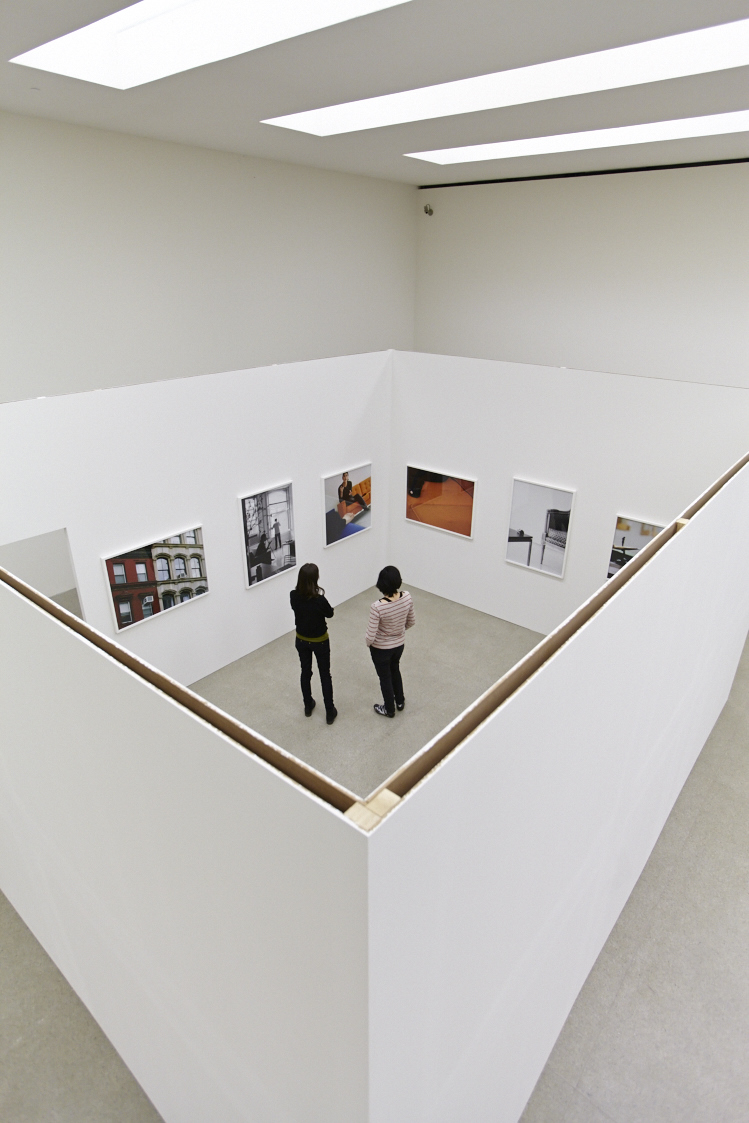 Barbara Probst (* 1964, Munich, lives in New York and Munich) challenges the traditional use of photography to show only one perspective and a single representation of reality. In the series she has been working on since 2000, entitled exposures, she presents multiple viewpoints to communicate the same subject at exactly the same moment in very different ways. Using up to thirteen synchronised cameras released by a remote control either on tripods or managed by assistants, Probst frequently exploits the visibility of the equipment to include the act of photography itself in the images. The exhibition at the Kunsthaus CentrePasquArt is the first institutional presentation of Barbara Probst’s work in Switzerland and shows photographs produced between 2001 and 2012. From the earlier exposures that first negated the concept of hierarchy between images within the same series to the recent bodies of work juxtaposing a larger number of both interior and exterior views, she has continued to explore new aspects of the concept of observation, as well as the ability of photography not to tell a definitive truth but to show reality as the camera saw it.

Trust in the photograph as a record of truth was long ago discredited by exposure of an artifice potentially as pronounced as that fundamental to painting. We are, nonetheless, accustomed to the authority of images that present a single view, selected by the photographer as being the most representative. With her exposures, Barbara Probst has worked consistently to disrupt this tradition, exploring some of the unspoken aspects of a medium she shows to be anything but straightforward.

The most striking formal aspect of Probst’s photographic work is her use of two or more shots to communicate the same subject at exactly the same moment from different angles. This strategy immediately engages us in an act of reading, of understanding the locations of the cameras and the relationship between the varying viewpoints. It also challenges the viewer to interact with the temporal and conceptual processes that the artist employs. Probst achieves these multiple viewpoints by using radio controls, synchronized cable releases and, in some cases, assistants who both create and are the subject of the shots. She exploits the unavoidable visibility of the equipment to incorporate the documentation of production, the act of photography itself, as a central component of the images. And, simultaneously, her decision to mechanically arrange the different viewpoints reveals Probst’s underlying sense of photography as a medium that doesn’t tell a definite truth but rather shows how the camera „saw“ it.

This aspect of her practice also emphasizes the physical nature of making photographs. Although their faces are concealed by the cameras they hold, Probst and her assistants are shown bending, lying on the floor, and leaning precariously over precipices. These poses are highly performative, their exaggerated nature underlining the theatricality of the resulting images. Related to the revelation of process and this element of performance is Probst’s treatment of the role of time. She juxtaposes black-and-white shots with colour images to record the same scene and, although we know that these were taken simultaneously, the „vintage“ feel of the former images collides with the more contemporary appearance of the latter, underlining the subjective nature with which time is experienced.

Probst’s work is characterized by a number of significant experimental devices such as this. Whereas multiple perspectives represent the same split second of the camera shutter, the different viewpoints of a single studio or public arena offer a breathtaking and potentially limitless expansion of pictorial space. Objects are used to create context or, as in recent work, to act as stand-ins for the human figure, but they also play an important function as markers, helping us to interpret scales and angles, as well as the spatial relationships between the models.

The work presented in this exhibition clearly demonstrates that Barbara Probst’s work has increased in complexity over the last decade. Whilst reflecting our experience of how we perceive the world, her work is also concerned with the intrinsic qualities of her chosen medium. Profound and playful, challenging and engaging, Probst makes a significant contribution to the role of photography in contemporary art.

The exhibition and accompanying publication are a collaboration between the Kunsthaus CentrePasquArt, the Centre for Photography, Copenhagen and Rudolfinum, Prague.