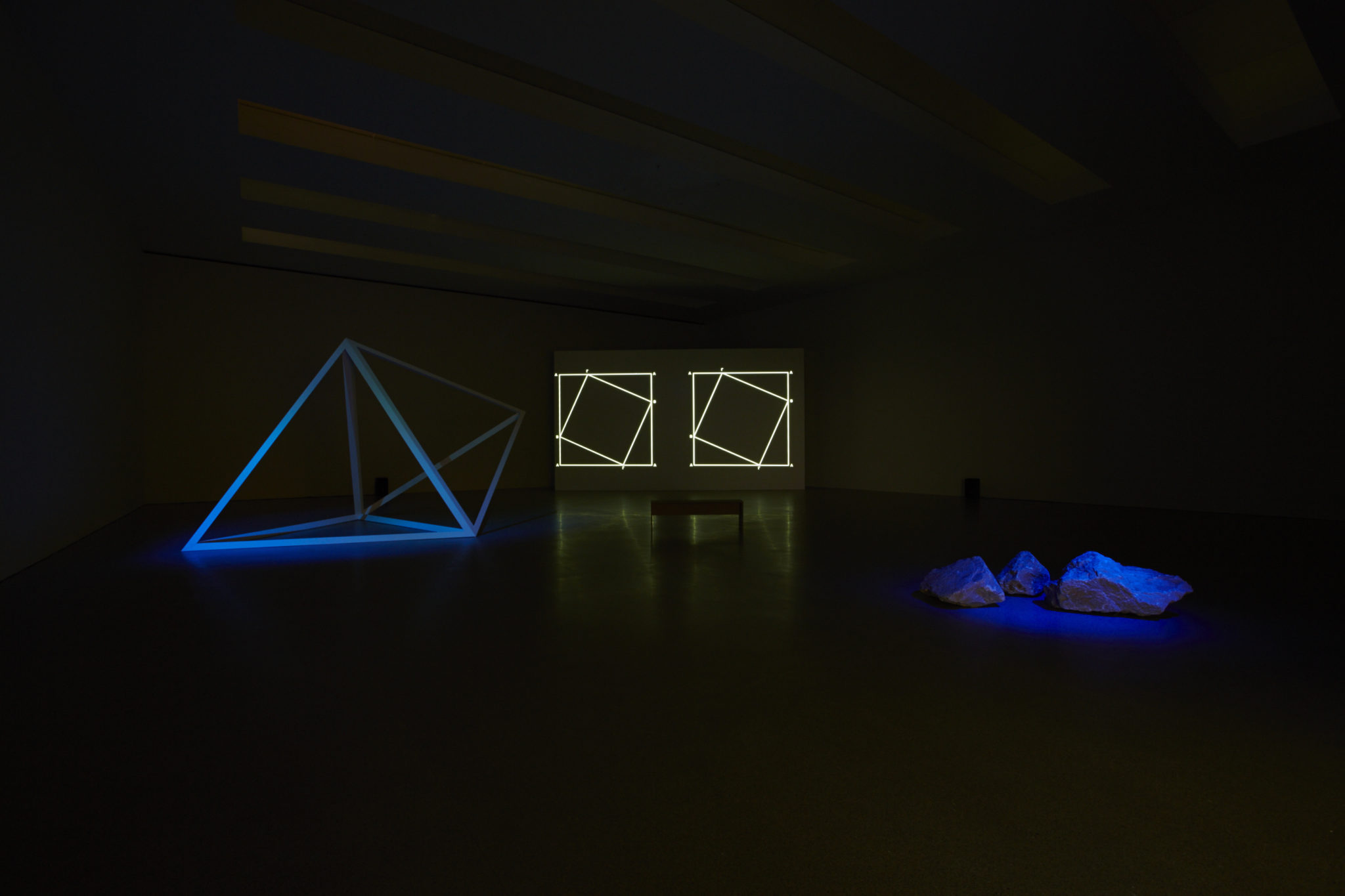 In the films of Anja Kirschner (*1977, DE) and David Panos (*1971, GR/US), which oscillate between documentary and fiction, historical and literary elements collide with references from popular culture. At Kunsthaus CentrePasquArt the artist duo’s presentation includes the two extensive video installations Ultimative Substance (2012) and The Last Days of Jack Sheppard (2009). Both works engage with the critical representation of history and the tensions between empirical research and artistic form, and revisit the past in order to shed light on the present. Drawing on references from archaeology, philosophy, mathematics and ritual, Ultimate Substance departs from the hypothesis that the introduction of coinage in the ancient Greek world effected a profound cognitive shift that was key to the emergence of western philosophic, scientific and dramatic traditions. The Last Days of Jack Sheppard sets the tale of the notorious thief, whose numerous prison escapes made him a folk hero, against the backdrop of frenzied financial speculation in London in the 1720s.

Anja Kirschner and David Panos filmed Ultimate Substance during the past year in Greece. The video projection is complemented in the exhibition by rocks and a model of a Platonic solid. As an entirety all three elements refer to the separation of physical and spiritual activity that was brought about by the introduction of coinage in the ancient Greek world. Ultimate Substance was filmed in and around the Numismatic Museum in Athens and in Lavreotiki, a nearby mining district, which provided the silver from which the Athenian coins were struck, constituting the material base on which the classical Athenian city-state was founded. Abandoned in Roman times, the mines were rediscovered in the nineteenth century, making Laurion the first factory town of the modern Greek state. Ultimate Substance focuses on presentation and stylisation, as well as on formal elements that symbolise the development of philosophy, mathematics and drama in Ancient Greece.

Expanded by props and historical archive material, the critical costume film, The Last Days of Jack Sheppard examines the connections between fiction, speculation and representation. Based on the inferred prison encounters between Jack Sheppard and Daniel Defoe, ghost-writer of Sheppard’s ‘autobiography’, the film takes its inspiration from the original prints, ballads and literary accounts of Sheppard’s life. The garrets, coffee houses, offices and prisons where the action takes place are recreated from the printed books, woodcuts and engravings of the time. This careful integration of primary sources has the effect of making the protagonists appear to move between two- and three-dimensional space.

A small videotheque in the exhibition will present three earlier films by Kirschner and Panos which, like Ultimate Substance and The Last Days of Jack Sheppard, deal critically with historical material to explore twenty-first century concerns. Shifting between satirical science-fiction and Brechtian ‘Lehrstueck’, Polly II (2006) portrays the lives of pirates and outcasts surviving in the flooded ruins of East London, a lawless zone set to become the latest in luxury waterside living. In Trail of the Spider (2008) Kirschner and Panos transport motifs from the Western genre to the ‘vanishing urban frontier’ of East London, addressing the material and psychological conditions of aggressive gentrification in the wake of the 2012 London Olympics. The Empty Plan (2010) interrogates the relationship between theory and practice in the theatre of Bertolt Brecht. Contrasting scenes from Brecht’s exile in Los Angeles with reconstructed performances of his play The Mother in the late Weimar Republic, New Deal America and post-war East Germany, the film explores different modes of performance and their relation to changing historical and political circumstances.

The Last Days of Jack Sheppard was commissioned by Chisenhale Gallery London and CCA Glasgow with the support of the Henry Moore Foundation, Arts Council England and the Scottish Arts Council.

In conjunction with the exhibition the Secession Vienna, Extra City Kunsthal Antwerpen, Neuer Berliner Kunstverein and Kunsthaus CentrePasquArt have issued a publication (en/dt/gr) with texts by Anja Kirschner and Richard Seaford, distributed by Revolver Verlag.

Anja Kirschner and David Panos were winners of the Jarman Award in 2011. They are represented by Hollybush Gardens (UK).